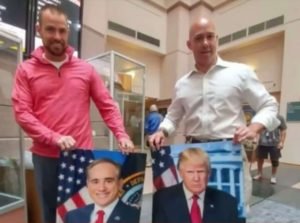 A group of local veterans was enraged by two empty picture frames hanging in the lobby of the Palm Beach, Florida VA Hospital.

The veterans noticed that almost two months into President Trump’s administration, the VA Hospital had failed to hang the requisite pictures of the Commander-in-Chief and VA Secretary so they contacted their congressman.

“Two blank holes, it’s been 60 something days now,” said Veteran John Rourke. “The veterans administration has been asked about it a few times, the local VA hospital has and they haven’t had any real reason other than they didn’t have the picture, which is readily available.”

Rep. Brian Mast (R-FL) who is a veteran and represents the 18th district which includes northern Palm Beach responded to the veteran’s request by bringing in photos of President Donald Trump and VA Secretary David Shulkin and hanging them in the empty frames.

Shortly after the congressman left, VA officials had the photos removed.

CDN has reached out to the Government Printing Office, Government Services Administration and Office of Veterans Affairs for comment and this story will be updated if a response is received.

Support Conservative Daily News with a small donation via Paypal or credit card that will go towards supporting the news and commentary you've come to appreciate.
Tags
Brian Mast David Shulkin Palm Beach the Department of Veterans Affairs VA Hospital