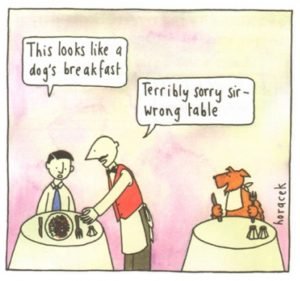 Conservatives always knew Trump’s policies would be a dog’s breakfast of competing initiatives and impulsive proposals. His State of the Administration speech only served to confirm it.

There were solid assurances to reestablish the rule of law and promises to develop a “historic” tax reform program that will make US businesses more competitive with other countries.

Unfortunately, waiting for tax reform from a Republican Congress that supports business because it makes campaign contributions and ignores competition because it doesn’t, is like waiting for a pause in an Obama monologue.

Rather than wait, Trump issued an order that requires the executive branch to remove two old regulations for every new one it issues.

That’s a great start; although something tells me at least initially the regulations deleted are going to be those covering the sodium content of salt pork issued to the Army of the Potomac.

But how does removing burdensome regulations on US business square with requiring those same businesses to provide paid family leave? I know it’s a logical progression from universal Pre–K, which is taxpayer–funded daycare, to paying mothers to raise their own babies, but it’s not logical for Republicans trying to make America competitive.

Trump’s new Commissar of Motherhood is going to be regulating up a storm. What number employees is the cutoff for coverage? Will men get to take advantage of paid leave? What about men who can’t decide if they are a man or a woman? Can homosexuals take off to raise a surrogate child? Is a polygamist limited to children from one wife or do all qualify? Does a mother of twins get twice as much leave? Can a divorced husband take off if he still gets along with the ex–wife and she has a child? Will leave only apply to immediate family or will it be like chain immigration and apply to cousins, uncles and people with similar last names?

Do mothers who abort their child get time off to sooth a guilty conscience? How long does the leave last? If a woman gives birth to a girl and a few years later she decides she’s a boy, can mom take another leave to help with the transition? If a woman adopts an infant, does she qualify? If a woman serves as a surrogate mother can she take paid leave, too?

Will the payment be a percentage of salary or a fixed rate? Will there be a means test? How about a citizenship test? Does a woman continue to earn seniority as she cares for junior? Does the leave clock for a premie start when the child was born or when it should have been born? If a mother’s state already has a paid leave program does she have to choose one or can she double–dip?

Just answering those few questions will generate reams of regulations. Will the Commissar get a free pass on the new one–for–two regulatory rule and start from scratch? Or will he have to persuade other agencies to donate old regulations he can sacrifice on the altar of red tape?

I’m sorry, but this has Ivanka’s fingerprints all over it and no one that I know of voted for her.

This program better left to the states. California, New Jersey, Massachusetts and Rhode Island already have leave programs. The other states are free to follow their lead and burden their businesses, too.

This is not to say I downplay the importance of motherhood. I don’t. Conservatives put much more emphasis on the nurturing of the nuclear family than the left does. Strong families build a strong society.

Let’s say Virginia, where I live, wanted to encourage working mothers to stay home with their children for the first three months. I could support a plan that takes inspiration from the foster parent program.

Virginia pays foster parents $462 a month for children under age four. It could start a new Leg Up on Life program that pays working mothers a similar amount for the first three months of the child’s life. This encourages mothers to take time off from work to establish a relationship with the newborn and removes some of the financial pressure.

In the interest of equity I would allow both working and non–working women to be eligible. In the interest of keeping the program simple, the payment would not be means tested. If women already had paid leave from their place of employment, they could collect both payments.

This program has the advantage of being simple, non–federal and no burden on business. It encourages mothers without discouraging job creation. Best of all it doesn’t establish a federal entitlement Democrats could increase at some time in the future, like Trump’s does.