We saw the first political assassination of a Trump administration official this past week. Gratefully, it was only “political,” but it was an assassination, nonetheless, as intelligence insiders leaked content of calls between the new National Security Advisor, Michael Flynn, and the Russian Ambassador. The media fanned the flames forcing the resignation of Flynn, thereby revealing the left’s modus operandi for removal of Trump appointees for the next four years. 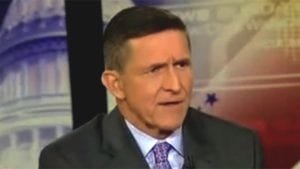 In December when Flynn talked with Russian Ambassador Sergey Kislyak, Flynn said it was to discuss logistics of a call between President Donald Trump and Russian President Vladimir Putin. Apparently they also discussed the sanctions imposed by outgoing President Barack Obama on Russia for their assumed and alleged “hacking” of the U.S. election in November.

By way of retaliation, based on the allegations of meddling in the election, Obama imposed sanctions that included kicking out 35 Russian officials and closing down two Russian-owned compounds in the U.S. President Putin said the next day that he had no intention of retaliating against Obama’s sanctions, but said he’d wait and deal with the Trump Administration.

Flynn, when recounting his discussion with the Russian Ambassador, obviously talked about Obama’s sanctions, but averred that he hadn’t. And technically, this was Flynn’s error – he lost the confidence of the President and the Vice President by not telling them that sanctions were in fact discussed. Even in his press conference this week President Trump said Flynn wouldn’t have been doing his job if he hadn’t discussed Obama’s sanctions. The sin was not in discussing the sanctions, the sin was in not telling his bosses that he had.

And this is where the political assassination occurred. According to the Washington Post, an intelligence source contacted them revealing, illegally, that the December 29th call between Flynn and Kislyak did include discussion of the Obama sanctions. It’s a felony to disclose intelligence data and information. And in order for an intelligence insider to leak something so inconsequential, it was obviously intended to cause political damage to the administration. There really can be no other viable explanation as to why someone in our intelligence apparatus would go public with such a disclosure. 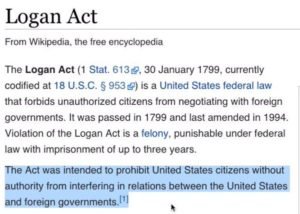 Many have attempted to claim that Flynn violated the Logan Act, since he was not yet functioning in his new appointment as the National Security Advisor. This is a red herring. The Logan Act dates to 1799, when a state legislator with no ties to any administration tried to assert himself as a personal negotiator for final peace with France. The anti-Jefferson Federalists did not like this private initiative, so they passed the Logan Act to make private ventures intent on negotiating personal treaties over international feuds a crime. A representative of an incoming or an outgoing administration is functioning in their official, or official-to-be, capacity, and are not acting a private citizens. Apparently Flynn was addressing Obama’s sanctions against Russia, not negotiating for them. And as President Trump said this week, Flynn would not have been doing his job properly if he didn’t broach the subject of Obama’s sanctions.

If one were objective about applying the spirit and the letter of the law from the Logan Act, we’d look no further than eight years ago. The summer before the November 2008 election, then-candidate Barack Obama, a private citizen who had no authority to speak for an American administration, went to the Middle East and Europe and spoke extensively, one-on-one, about policy with leaders from Kuwait, Afghanistan, Iraq, Jordan, the West Bank, Israel, France, Germany and Britain. He was a candidate, a private citizen. He was not yet a president-elect. He came closer to violating the intent of the Logan Act at that time than General Michael Flynn did in December as the incoming National Security Advisor.

Clearly, this will be the tactic employed by the politically motivated within the government, and the enabling media. Employing the “Rules for Radicals” playbook of Saul Alinsky, they will “Pick the target, freeze it, personalize it, and polarize it,” one administration official at a time. They will do so with another Alinsky rule, “The major premise for tactics is the development of operations that will maintain a constant pressure upon the opposition.” They consummated this political assassination in record time – just three weeks! 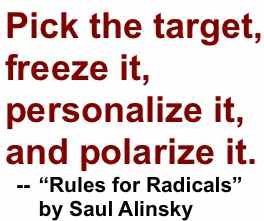 Devin Nunes, the Chairman of the House Permanent Select Committee on Intelligence, sees the writing on the wall. “There does appear to be a well-orchestrated effort to attack Flynn and others in the administration. First it’s Flynn.” Then Nunes warned, “Next it will be Kellyanne Conway, then it will be Steve Bannon, then it will be Reince Priebus.” Indeed, right now the military and intelligence ranks are full of Obama loyalists who are leaking classified information. These are insiders, and they’re supposed to be working for the government, and for us. But they seem to be embarking on a treasonous mission of Russian roulette with the republic.

There is now blood in the water. And even some who have taken an oath to support and defend the Constitution are gunning to take it down, all for politics. Senate Minority Leader Sen. Chuck Schumer signaled clearly their intent. “General Flynn’s resignation is not the end of the story. It is merely the beginning.” All this from the ones who believe, “never let a crisis go to waste.” And if there’s no “crisis,” they’ll fabricate one.

They will attack incessantly, and also use another tactic out of the Democrat Party playbook developed by former Speaker Tom Foley, “The seriousness of the charge is what matters,” regardless of the facts. As with Flynn’s issue, he broke no laws, he was doing what he was supposed to as National Security Advisor designate, but because he misrepresented the full nature of his discussion with the Russian Ambassador, the “seriousness of the charge” warranted breaking the law by an intelligence official who had a political axe to grind.

Former U.S. Attorney Joseph diGenova has said, “All of the disclosures to the Washington Post are federal crimes.” Unless the Trump administration wants to be looking over their shoulder with every discussion they have with every foreign counterpart, and make of themselves targets for the holdover Obama ideologues within the government, they’ve got to find and prosecute the source of this leak with a vengeance.

The government is bad enough to the average citizen when it’s functioning cohesively. It will be literally the demise of the republic if Obama and Hillary loyalists within the government act in a destabilizing and demoralizing way, disrupting policy, engaging in politics in their official capacities, and wreak havoc with the legal operations of our democratically elected government.

Support Conservative Daily News with a small donation via Paypal or credit card that will go towards supporting the news and commentary you've come to appreciate.
Tags
Michael Flynn