I long for the days when there was common sense in our society; unfortunately those days are no more. There was a time when being born a male made you a male for the rest of your life. Same with being born a female meant you were a female for the rest of your life. But alas, today whatever you were born is meaningless; all you have to do is say you identify as whatever you want and society accepts it. Where is the reality?

The Boy Scouts of America was incorporated on February 10, 1910, their goal was to turn boys into men and teach them truth, justice and the American way. Michael Surbaugh, Chief Scout Executive of the group said,  “After weeks of significant conversations,” he explained, “at all levels of our organization, we realized that referring to birth certificates as the reference point is no longer sufficient.” Is this guy an idiot or what? A birth certificate tells you what gender a person truly is not what they pretend to be.

First the B.S.A started to allow homosexual scouts, and then they allowed the scout masters to be homosexual. There is no way I would allow a son of mine to go on overnight outings with that kind of situation. The Scouts were supposed to teach morality, whatever happened to that? I expect registration to diminish because of this. Boy Scouts are for boys and Girl Scouts are for girls, period.

The Boy Scout oath is as follows. On my honor I will do my best to do my duty to God and my country and to obey the Scout Law; to help other people at all times; to keep myself physically strong, mentally awake, and morally straight. Notice it says morally straight.

But it is not only the Scouts that are infected with this craziness. The United States Supreme Court is slated to decide whether transgenders in public schools will be allowed to use restrooms of their choice in public schools, as a 17-year-old girl who professes to be a boy presses her case to use the boy’s bathroom at a Virginia high school.

President Steve McConkey of 4 WINDS a Christian organization has fought the enforcement of transgenderism in athletics for years and recognizes the dangers of the LGBT agenda forcing its way into public life – a movement that is now reaching and affecting innocent and vulnerable children in America’s schools.

Sorry this is insanity, this should not even be an issue, women don’t belong in men’s locker rooms and men’s showers and visa versa for men in women’s. This country has lost its values and morality and common sense, how did we let it get this far, that we now allow people to identify as anything they want and we have to accept it. Well I won’t and never will. 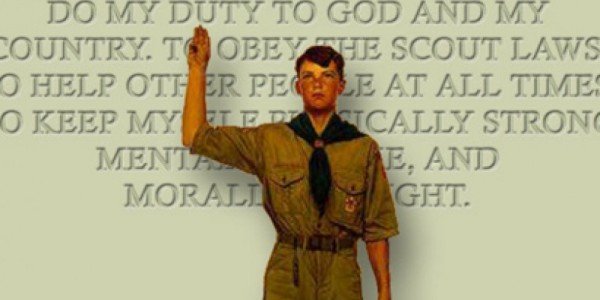 Support Conservative Daily News with a small donation via Paypal or credit card that will go towards supporting the news and commentary you've come to appreciate.
Tags
Politics The Boy Scouts of America transgenders.