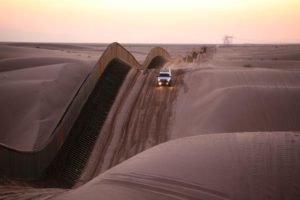 White House Spokesman Sean Spicer told reporters on Thursday that President Donald Trump is considering a 20% tax on imports from Mexico to pay for the Southern U.S. border wall.

Mr. Spicer explained that the tax would likely appear in a full tax reform package according to Bloomberg.

The announcement came just hours after Mexican president Enrique Pena Nieto canceled a meeting with President Trump saying that Mexico was not going to pay for the wall.

Mexico imported almost $300 billion to the U.S. market in 2015 which would mean that if 100% of imported goods were hit with the 20% then just one year of the proposed tax would more than pay for a wall is estimated to cost between $12 and $20 billion to build.

Details are sparse, but it would appear some imports will not be taxed as Spicer told reporters they expect to only bring in $10 billion per year.

Support Conservative Daily News with a small donation via Paypal or credit card that will go towards supporting the news and commentary you've come to appreciate.
Tags
Enrique Pena Nieto Mexico The Border Wall