According to a report in the Silicon Valley Business Journal, previously missing former CEO of the Clinton Foundation will be heading former Google CEO Eric Schmidt and his wife Wendy’s philanthropic climate organization.

Braverman will be in charge of the philanthropic arm of the Menlo Park-based Eric and Wendy Schmidt Group, an official with the organization told the Silicon Valley Business Journal. The group has given away hundreds of millions of dollars for environmental and other causes.

Mr. Braverman has been missing since October when WikiLeaks showed that Democratic operatives believed Braverman a mole leaking Clinton Foundation information to the press.

We have reached out to Eric Braverman and former Google CEO Eric Schmidt for comment, but have so far not heard back – then again, even the twitter announcement of his new job has gone unanswered by the former Clinton chief: 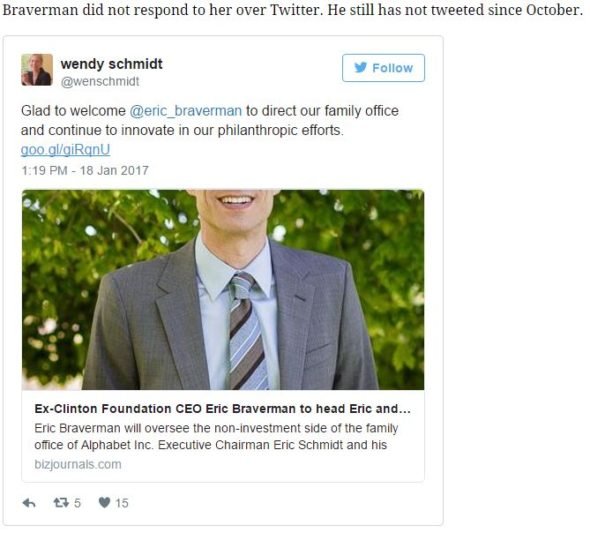 The mystery remains why Braverman has avoided all public comment since October. Was it because lawyers or law enforcement advised or ordered him to avoid putting anything out that could jeopardize an investigation or was he just avoiding the massive public attention that would have come with any statement (this article and referenced media included.)

Stay tuned, this can only get more interesting.

Support Conservative Daily News with a small donation via Paypal or credit card that will go towards supporting the news and commentary you've come to appreciate.
Tags
Eric Braverman