An outfit courting protesters for President-elect Donald Trump’s inauguration this Friday is posting job ads in several cities with the stated goal of disrupting the event using protesters motivated by money. 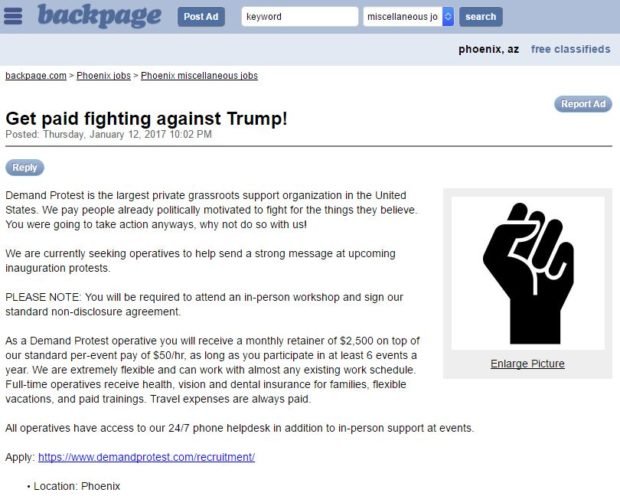 Ads are appearing on backpage.com in Phoenix, San Diego, El Paso and several other cities offering $2500 per month plus $50 per hour to join “upcoming inauguration protests.”

The demandprotest.com website’s ownership is a bit of a mystery and highly questionable.

While the site’s phone number includes a San Fransisco area code, the listed owning company Demand Protest, LLC is not registered in California.

Checking the domain’s ownership produces a privacy proxy as the owner:

CDN has not been able to locate an incorporation filing for Demand Protest, LLC in the U.S. or Canada. None of our calls for comment have been returned. This is likely either a hoax or a straw company for something to come later.

On Fox News’ Tucker Carlson Tonight on Tuesday, Demand Protest Los Angeles Director of Operations “Dom Tullipso” appeared and admitted that the operation was a hoax.

Support Conservative Daily News with a small donation via Paypal or credit card that will go towards supporting the news and commentary you've come to appreciate.
Tags
Demand Protest inauguration Protests