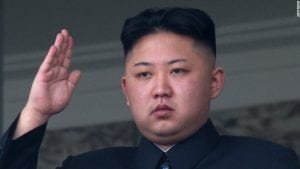 President-elect Donald Trump took to Twitter to let North Korea and the world know that the communist nation’s plans to build nuclear ICBMs with the capability to hit California would not be allowed.

Sunday, North Koreas leader Kim Jong-Un announced that his nation was on the cusp of testing an intercontinental ballistic missile with the ability to hit San Fransisco or Los Angeles.

“We have reached the final stage in preparations to test-launch an intercontinental ballistic rocket,” Kim said.

North Korea just stated that it is in the final stages of developing a nuclear weapon capable of reaching parts of the U.S. It won't happen!

North Korea just stated that it is in the final stages of developing a nuclear weapon capable of reaching parts of the U.S. It won’t happen!

N. Korea has become used to pushing the feckless Obama administration around. Mr. Obama has bowed to foreign leaders and given little resistance to dictators like Putin, Castro, Un or others.

What Trump’s “It won’t happen” statement means isn’t immediately clear, but the basic message is that the United States will no longer tolerate petulant dictators threatening the strongest nation in the world.

Support Conservative Daily News with a small donation via Paypal or credit card that will go towards supporting the news and commentary you've come to appreciate.
Tags
Kim Jong-un