More foreigners are complaining about discrimination and Donald Trump hasn’t even taken the oath of office. This time it’s Samoans, which I always thought were New Zealand’s problem, but evidently are ours.

The Telegraph reports two businessmen “filed complaints to the US Transportation Department after they were weighed before boarding a flight from Honolulu – and assigned specific seats to keep the aircraft’s load evenly distributed.” 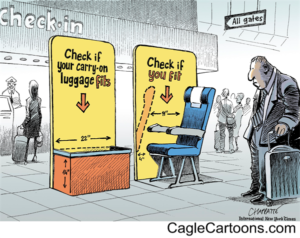 One of the weighees, claims the rule is “discriminatory because it only applies to those flying to or from American Samoa,” which pretty much proves his claim false, since a rule that applies to everyone by definition can’t be discrimination.

Hawaiian Airlines is fighting obesity — or at least poking it in the side — in two ways. First passengers flying to or from Pago Pago, the capital of American Samoa, are barred from selecting seats online and must endure the instrumental version of “Fat–Bottomed Girls” while completing their purchase. Later at the airport everyone is weighed before boarding.

This fact alone creates a mental picture of American Samoa that’s not appealing and pretty much flies in the face of all Pacific tourism advertising. If you’re getting the feeling it would require a tarpaulin rather than a sarong to cover the women of Samoa, you’re correct.

The CIA has done research into the topic — why fight hard–to–find ISIS when it’s so much easier to locate the obese — and its World Factbook informs us American Samoa has the highest rate of obesity in the world.

And this is without a single Old Country Buffet location on the entire island.

The spooks found 74.6 percent of the population comes in the large economy size. But since Samoans haven’t stopped eating since 2008 when the research was done, more current estimates “claim the obesity rate could now be as high as 94 percent.”

Since Jenny Craig’s nation–building effort has evidently failed, the airline was forced to weigh all passengers in the balance. “Our aircraft cabin weight was heavier than projected. This requires us to manage the distribution of weight across each row in our cabin and we have elected to do so by making sure that one seat in each row is either empty or occupied by a traveller under the age of 13,” a spokesman explained.

Samoa Air, which competes on the same route, came up with a solution in 2013 that’s completely neutral. It determines all passenger fares based on weight. Wikipedia ran the numbers and the program works like this: “The fare is calculated by multiplying a base fare (depending on the route flown) by the total weight of the passenger plus their luggage. So a passenger flying from Apia to Asau weighing 176 lbs. and carrying 45 lbs. of luggage would pay $132 for the flight (220 lbs. x $1.32 base fare), while another passenger weighing 132 lbs. and traveling without luggage would pay $79.20 for the same flight. Children are charged in the same way at a 75 percent rate.”

That’s a much more equitable fare structure. I think the bodybuilder that weighs 300 lbs. should pay a premium just like the couch potato who weighs 300 lbs. Right now flying in the US is airborne Obamacare only in this instance smaller people’s ticket prices are subsidizing larger people.

On second thought, here on the ground a lot of the pre–existing condition class is made up of people who annex your armrest when you share a row. And to add insult to injury they often claim a disability and board early, getting your overhead space, too.

Weighing passengers is certainly less punitive than the baggage–sizing boxes at the gate. Sadistic gate agents know any bag larger than an Altoids box won’t fix in those Iron Maidens, which are designed solely to force passengers to check bags.

A slight modification to Samoa’s idea would make the fares more palatable for US flyers. Airlines could publish height and weight ranges for passengers. I was 6 feet tall before I got married and my wife crushed my spirit. That height and my 186 lbs. puts me squarely in the 160 — 196 lb. range for males, so no extra charge for me, but if I was over then it’s only fair to add to the fare.

If a passenger is below their weight range and able to get down the Jetway unassisted then I think a rebate is in order.

The only downside to a weight–based fare structure is it would encourage parents to ship their kids more frequently. I can’t decide which is worse: A dormant obese person passively invading my space, or a juvenile kicking the back of my seat.