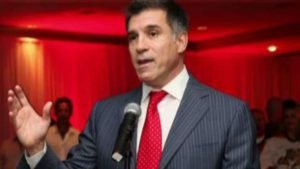 As Secretary of the Army, Viola will combine a deep background in national security affairs with an impressive track record of leading and managing high-performing teams within the military and the private sector. Viola is a West Point graduate and U.S. Army veteran. He was trained as an Airborne Ranger infantry officer and served in the 101st Airborne Division. Viola has long been engaged with national security issues even after his military service.

Following the terrorist attacks on September 11, Viola worked tirelessly to support the Army philanthropically in the areas of counterterrorism, cybersecurity and leadership development, including helping to found the Combating Terrorism Center at West Point. He has also founded multiple high-value companies, including Virtu Financial, and chaired the New York Mercantile Exchange. Viola’s business experience makes him well positioned to help guide a Fortune 10-sized company, the U.S. Army, to accomplish its broad mission in the most innovative and efficient way possible.

“I am proud to have such an incredibly accomplished and selfless individual as Vincent Viola as our Secretary of the Army,” said President-elect Donald J. Trump. “Whether it is his distinguished military service or highly impressive track record in the world of business, Vinnie has proved throughout his life that he knows how to be a leader and deliver major results in the face of any challenge. He is a man of outstanding work ethic, integrity, and strategic vision, with an exceptional ability to motivate others. The American people, whether civilian or military, should have great confidence that Vinnie Viola has what it takes to keep America safe and oversee issues of concern to our troops in the Army.”

“It is an honor to be nominated to serve our country as President-elect Trump’s Secretary of the Army,” said Viola. “If confirmed, I will work tirelessly to provide our President with the land force he will need to accomplish any mission in support of his National Defense Strategy. A primary focus of my leadership will be ensuring that America’s soldiers have the ways and means to fight and win across the full spectrum of conflict. This great honor comes with great responsibility, and I will fight for the American people and their right to live free every day.”

Viola is living proof of the American dream. He was born and raised in an Italian immigrant family in Brooklyn, and his father worked a truck driver. Viola was inspired to join the military after witnessing his father’s service in the U.S. Army in World War II. Viola was the first member of his family to attend college, and after graduating from the U.S. Military Academy at West Point in 1977, he was commissioned a second lieutenant in the U.S. Army that same year. After graduating from the Infantry Officer Basic Course and Ranger School, Viola reported to duty with the 101st Airborne Division. Viola remained a member of the U.S. Army Reserve after the completion of his active duty service. In 1983, he received his J.D. from New York Law School.

In the 1980s, Viola worked as a trader on the New York Mercantile Exchange (NYMEX) and also founded the first of many business ventures, including Pioneer Futures and the Independent Bank Group. After a long and influential career, Viola was appointed Chairman of NYMEX in March 2001.

Viola’s leadership of NYMEX on and after 9/11 resulted in the board of Exchange recognizing his actions with a citation that included this statement: “His heroic leadership served as a beacon to thousands of Exchange members and staff, providing us with the fortitude to resume operations and preserve the efficiency of the American economy and global energy and metals markets in the face of this great tragedy.” In 2008, Viola founded Virtu Financial, a global leader in electronic market making, and took the company public in 2015.

Support Conservative Daily News with a small donation via Paypal or credit card that will go towards supporting the news and commentary you've come to appreciate.
Tags
Army Trump Administration Vincent Viola