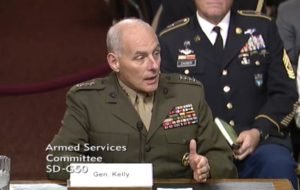 As Commander of U.S. Southern Command (SOUTHCOM), Gen. Kelly oversaw U.S. military operations in Central and South America and the Caribbean, giving him unique insight into some of the challenges the United States faces at its southern border. He was intimately involved in and often coordinated the whole of U.S. Government interagency efforts in the interdiction of drug and human trafficking, counterterrorism, human rights, and working with partners to safeguard southern approaches to the U.S. border.

“Gen. John Kelly’s decades of military service and deep commitment to fighting the threat of terrorism inside our borders makes him the ideal choice to serve as our Secretary of the Department of Homeland Security,” said President-elect Donald J. Trump. “He is the right person to spearhead the urgent mission of stopping illegal immigration and securing our borders, streamlining TSA and improving coordination between our intelligence and law enforcement agencies. With Gen. Kelly at the helm of DHS, the American people will have a leader committed to our safety as well as one who will work hand-in-hand with America’s rank-and-file TSA, ICE and Border Patrol officers.”

“I am humbled and grateful to be nominated to serve in President-elect Trump’s cabinet as Homeland Security Secretary,” said Gen. John Kelly. “The American people voted in this election to stop terrorism, take back sovereignty at our borders, and put a stop to political correctness that for too long has dictated our approach to national security. I will tackle those issues with a seriousness of purpose and a deep respect for our laws and Constitution. I am honored for the opportunity to be back in the service to our country, and our people.”

Gen. Kelly was born and raised in Boston. He enlisted in the Marine Corps in 1970 and was discharged as a sergeant in 1972. Following graduation from the University of Massachusetts in 1976, he was commissioned as an officer in the Marines. Since then, he has commanded at every level from platoon commander through corps level and combatant command in both peace and war.

During his many years as an officer, he notably served as the Commandant’s Liaison Officer to the U.S. House of Representatives, and in a subsequent assignment to the entire U.S Congress as a brigadier general.

In another notable assignment, this time as a three-star, he served as the senior military assistant to the Secretary of Defense from March 2011 to October 2012 before commanding the United States Southern Command.

Support Conservative Daily News with a small donation via Paypal or credit card that will go towards supporting the news and commentary you've come to appreciate.
Tags
DHS John Kelly The Department of Homeland Security Trump Administration