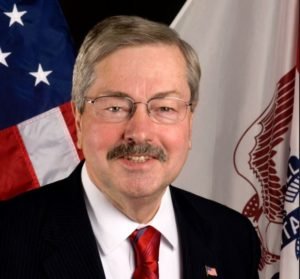 President-elect Donald Trump announced his pick for U.S. Ambassador to China in Iowa Thursday night at one of the USA Thank You tour rallies.

Trump announced that he would be nominating long-time Governor of Iowa Terry Branstad the position of United States Ambassador to China.

The Trump campaign had issued a statement earlier on Thursday putting Branstad forward as the nominee.

“Governor Branstad’s decades of experience in public service and long-time relationship with President Xi Jinping and other Chinese leaders make him the ideal choice to serve as America’s Ambassador to China,” read the statement.

Gov. Branstad made a brief appearance at the event to thank Mr. Trump for the nomination. The governor had announced acceptance in the earlier statement where he sad that “after long discussions with my family, I am honored and humbled to accept President-elect Trump’s nomination to represent our great country as Ambassador to China,” Branstad said. “I have known President Xi Jinping for many years and consider him an old friend. I look forward to building on our long friendship to cultivate and strengthen the relationship between our two countries and to benefit our economy.”

Branstad will be taking the post just after Trump launched several comments at the Chinese. The President-elect most recently lashed out against China on twitter:

Did China ask us if it was OK to devalue their currency (making it hard for our companies to compete), heavily tax our products going into..

Donald Trump has made remarks about China’s currency manipulation and its South China Sea incursions central to his campaign.

Governor Branstad will have his work cut out for him.