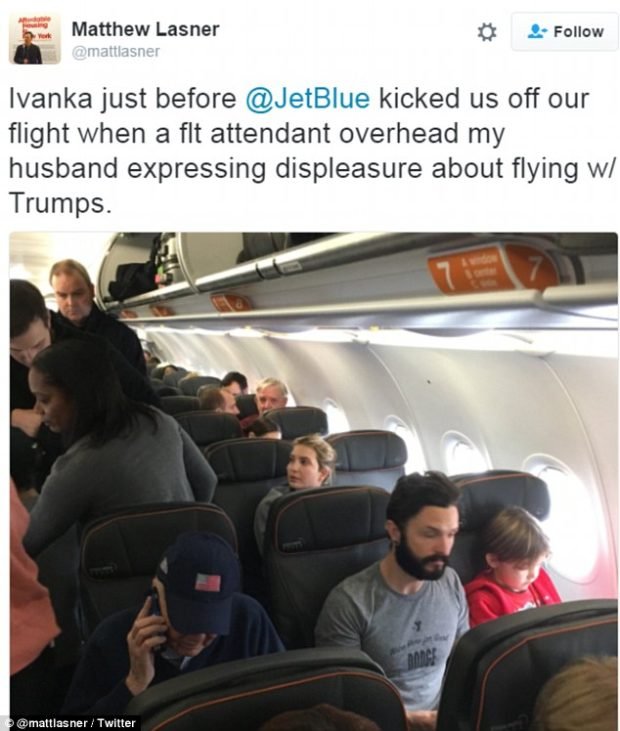 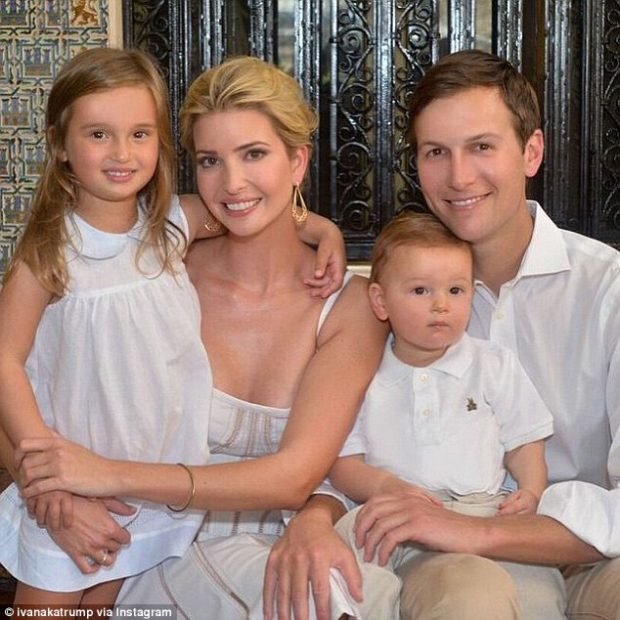 A passenger on a JetBlue flight accosted Ivanka Trump on Thursday morning   ‘Your father is ruining the country,’ said Dan Goldstein, a lawyer from Brooklyn, who had a child in his arms. He then began demanding to know why Ivanka was on the flight and not travelling on a private plane while she sat with her kids.

Ivanka ignored him and tried to preoccupy her children with crayons while the man berated her.

A fellow passenger said later that Ivanka told security and flight staff she did not want to make the incident a thing and have anyone removed from the flight .

The man’s husband, Matthew Lasner, later tweeted: ‘My husband expressed his displeasure in a calm tone, JetBlue staff overheard, and they kicked us off,’

However one hour before that he wrote on Twitter: ‘Ivanka and Jared at JFK T5, flying commercial. My husband chasing them down to harass them.’

Lasner and Goldstein were accommodated on the next available flight according to JetBlue, and Lasner deleted his Twitter account soon after

Ivanka and her family are heading to Hawaii for the holiday , meaning they will be spending 12 straight hours on the plane . Ivanka Trump made it very clear on Thursday that she has no problem staying cool and calm under pressure.

The 35-year-old mother-of-three was travelling with her children on a JetBlue flight when a man began to accost her.’Your father is ruining the country,’ said Dan Goldstein, a lawyer from Brooklyn, who had a  child in his arms according to TMZ. Goldstein then began screaming out: ‘Why is she on our flight. She should be flying private.’

Ivanka paid as little attention as possible and tried to preoccupy her children with some crayons to diffuse the situation until the crew escorted him off the plane, which was making a nonstop trip to Honolulu.

Goldstein’s husband, Matthew Lasner, said that was not what happened however on Twitter, writing: ‘My husband expressed his displeasure in a calm tone, JetBlue staff overheard, and they kicked us off the plane.’ However just an hour prior to that Lasner wrote on Twitter: ‘Ivanka and Jared at JFK T5, flying commercial. My  husband chasing them down to harass them. #banalityofevil’

Lassner also took a photo of Ivanka sitting on the plane writing that they were kicked off for ‘expressing displeasure about flying w/ Trumps.’   And while Goldstein was happy to go after Ivanka ,and Lasner was eager to defend his actions, neither of the men confronted Ivanka’s husband Jared Kushner, who was right next to her on the flight standing in the aisle the entire time. Ivanka Trump ‘aggressively confronted by man on JetBlue while sitting with her

A liberal gay lawyer and his husband were on the same flight to Hawaii as Ivanka Trump and her husband and three kids were so he decided to harass her by going up to her and saying her father is ruining the country. What a jerk!!!! Trump’s not even in office yet so how is he ruing the country? This is another idiot snowflake who believes the lies and smears about Trump of the msm. Fortunately Ivanka is not the type of person who lets things like that bother her and like she said she didn’t want to make a scene. She handled it professionally not like this jerk. If that was me I would have congratulated her and say I was honored to be on the same flight as her and wish her well.

He and his husband (I still can’t get used to that!!) complained about being thrown off and Jet Blue was right in doing so. They didn’t want any incident while the plane was in the air and didn’t want Ivanka feeling uncomfortable. They are just as bad as that Arab prankster who was thrown off of Delta plane for purposely speaking in Arabic and then gets mad when they threw him off. I don’t blame them. He could have been a terrorist and there are plenty of them in here now  plotting  to  overthrow  our country  thanks to Obama.

This guy is supposed to be a lawyer. I wouldn’t want him defending me as he apparently doesn’t do his research because if he did he would see that it is Obama who is ruining the country and Trump who is saving it. Obama gave us this 20 trillion dollar debt and high unemployment and regulations up the wazoo controlling everything in  our lives. Trump is hiring the best and brightest most professional people in the country to straighten things out. They are successful people both men and women who expect results and know how to run a successful business and succeed. They are all from the outside and not politicians which America has been clamoring for  for decades now. Obama has all these Muslims in his administration and people like Valerie Jarrett who said her job is to make this country more Islamic. Obama said he would side with the Muslims and that’s just what he is doing. I guess this idiot lawyer doesn’t know that. All he knows is Trump is bad from what the lying media says.

I found these interesting comments that sum up things exactly.

, this nasty little sociopath is running around doing EVERYTHING he can think of to start trouble and create problems for Trump to make it more difficult for him to pursue his stated agenda. He hopes to keep Trump so busy putting out fires that HE is starting that he’ll not have time to do anything to demolish Obama’s precious “legacy.” And, yes, he really IS that petty and vindictive!

He’s picked fights with China AND Russia, destroyed this registry to make it harder for Trump to locate and identify the TERRORISTS among us, and oh, yeah–has stepped up his importation of UNVETTED Muslins, trying to cram in as many potential terrorists as he CAN before he leaves office. I hate to think what ELSE he will do before he leaves office.

Never doubt for a SECOND that he HATES this country and he HATES Trump, and will do EVERYTHING he can to hurt BOTH before he is FINALLY forced to vacate the Oval Office. And yes, he really IS that petty and vindictive!

If they did fly private then all the liberals would be screaming about that, too. You just can’t win with these people. No matter what you do or don’t do, they will find fault and complain. Talk about pompous. And the idiot that accosted her needs to be careful. Sometimes there is a conservative around who is just cranky enough to not put up with this nonsense and they might get hammered in the face with a fist.

I agree she should fly on a private jet, President-Elect Trump and his family should be protected from these idiots. The liberals have proven themselves to be insane and violent, our first family must be protected.