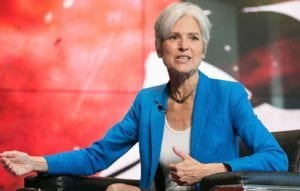 Jill Stein and the Green Party have some explaining to do after they dropped their case requesting a statewide recount in Pennsylvania because they ran out of money.

Saturday’s court filing to withdraw the case said the Green Party-backed voters who filed the case “are regular citizens of ordinary means” and cannot afford the $1 million bond ordered by the court by 5 p.m.

Stein started the push for a recount by asking for money, lots of it, to pay the fees and costs required to get Michigan, Wisconsin, and Pennsylvania to recount ballots cast in the 2016 Presidential election.

The fund-raising effort got started with Jill Stein asking for $1.5 million to pay for a recount – which then became $2.2 million once huge donations started pouring in, then $3 million and reports say that Stein and the Green Party raised almost $7 million.

So the question remains – Dr. Stein, where did all that money go if you are now struggling to put up a $1 million bond to push the Pennsylvania recount?

According to her own twitter account, the recount effort before the bond should only have required about $3-4 million dollars. Ponying up a $1 million bond should have been no problem unless that was never the goal – remember, the donations are non-refundable and will go to further efforts by the Green Party … or something.

The Pennsylvania GOP dropped this statement shortly after the Green Party pulled back their greenbacks and turned tail:

The filing of a discontinuance of the Election Contest by Jill Stein’s petitioners tonight is a recognition that their Election Contest was completely without merit, and meant solely for purposes to delay the Electoral College vote in Pennsylvania for President-Elect Trump…Candidate Jill Stein’s allegations created the false allusion that some unidentified foreign government hacked our state’s voting systems when absolutely no such proof existed.  We believe that she always knew that she had no such proof.

Congratulations never-Trumping Hillary-huggers, you just pumped up the ineffective and not-so-honest Green Party by falling for what appears to be .. a scam.