When Obama was elected president he famously promised America hope and change, but what we found ourselves wanting was hoping he would leave office so we could change all of his disastrous policies. Let’s face it, Obama will go down in history as one of the worst presidents ever, when you have x-president Jimmy Carter saying he was a bad president, he must be bad.

In a recent interview with Oprah Winfrey, Michelle Obama said, “Hope is necessary. It’s a necessary concept and Barack didn’t just talk about hope because he thought it was just a nice slogan to get votes. He and I and so many believe that. What else do you have if you don’t have hope?” This from a woman who said “For the first time in my life I am proud of my country” when her husband was elected.

Well 8 years later Obama has shattered all hope but he did change the country by moving it so far to the left that now Americans are shouting for real hope and change. For many Americans, the America we loved has slipped farther away from sight. The American culture has been swept aside and multi-cultureism has taken its place, people used to come to this country to be American’s. Freedom of speech has been put on hold because we have become a P.C. society. We are supposed to have freedom of religion in this country, but now freedom from religion has taken its place. All this and more brought on by the Obama presidency.

Now we are going to have Donald Trump as our next president. A man who does not believe in political correctness, a man who wants to put America and Americans first over all others. A man who is willing to shout about America’s greatness, unlike Obama who went around the world apologizing for America. Donald Trump is a man who is not afraid to face our enemies and call them what they are. Donald Trump wants to make America great again, something that Obama refused to do.

With Donald Trump we will finally get the hope and change we need and he comes into office with more experience under his belt than just being a community organizer. 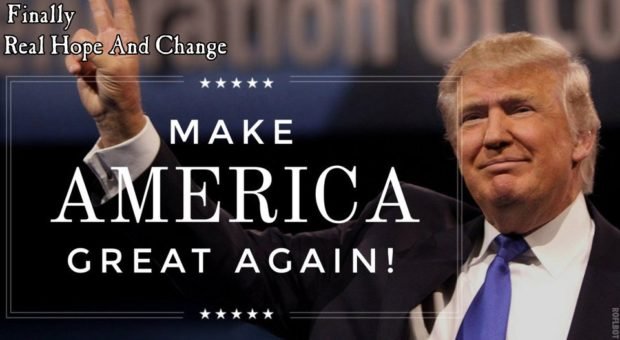 Support Conservative Daily News with a small donation via Paypal or credit card that will go towards supporting the news and commentary you've come to appreciate.
Tags
Hope and Change Politics