Last Sunday I took my 3 year old granddaughter to church, when we left she wanted to go to her favorite place, McDonalds. As we walked in something caught my eye, there were 3 stand up computers which are called self-service kiosks with a sign that said, Place order here, with only one girl working the counter where there used to be three. I said to myself “Wow, It’s happening already.”

It shouldn’t be any surprise to anyone with a slim understanding of economics that driving up costs for businesses means bad news for   customers and employees alike. In terms of driving up wages by force, there were only two results that could follow. Either that business was going to have to lay off employees in order to afford their work force, or find a way to circumvent having employees in the first place.

In a recent study it was found that a $15/hr minimum wage would eliminate 7 million jobs across the country. With all the data that points to so many lost jobs why do these social justice morons continue to protest for a $15 wage?

McDonalds is not the only one, Amazon is also jumping in as they unveiled the latest plan to automate American workers out of existence, a futuristic grocery store without any cashiers. High-tech sensors and artificial intelligence are allowing shoppers at the Seattle food market to swipe an app when they enter, then roam the aisles and grab staples like bread and milk, cheeses and chocolates and ready-made meals. Customers can watch as the items they pluck off the shelves get added to a virtual cart on the app and subtracted if they put them back with receipts emailed to them once they leave, according to the company.

Amazon’s plans mark its latest push into the $800 billion-a-year grocery business, following its AmazonFresh delivery service that began expanding across the country in 2013. The company wants to open more than 2,000 brick-and-mortar grocery stores across the country.

Britt Beamer, president of America’s Research Group, a consumer-behavior research and consulting firm, estimated that Amazon’s cutting-edge technology had the potential to wipe out 75 percent of typical grocery-store staff. “It’ll be a big job-killer,” Beamer said. “It’ll eliminate the cashier, it’ll get rid of the baggers, and it’ll eliminate the stock clerks. This could be big.”

I am not in favor of a minimum wage of any kind; the market should dictate a fair wage. Every time the government puts its hand into something you can bet disaster will follow. A $15 an hour minimum wage will be the death to many entry level jobs, yet the social justice idiots keep protesting for it. They are cutting their own throats and they don’t even know it.

Another thing these protesters don’t seem to grasp, that when you give an entry level worker $15 an hour, everyone up the ladder also has to get a raise. So that manager that was making $15 an hour now has to make $25 an hour and so up the line it goes. But let them keep protesting, it will be good practice, because they will be pounding the pavement for a job, any job. 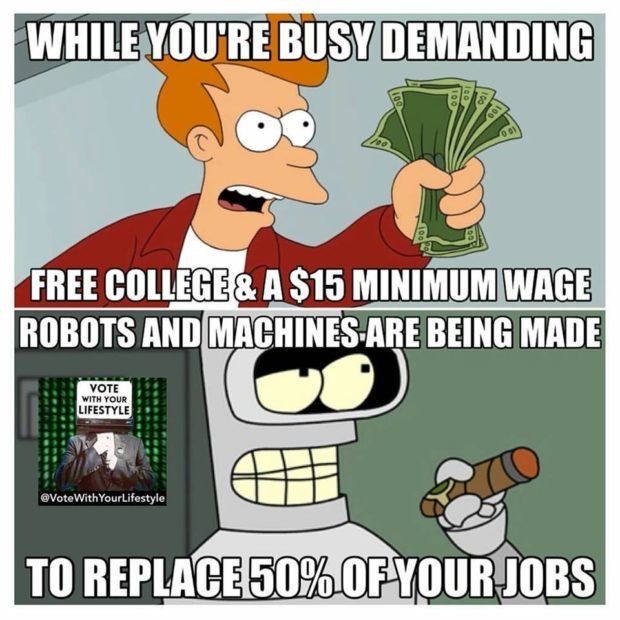 Support Conservative Daily News with a small donation via Paypal or credit card that will go towards supporting the news and commentary you've come to appreciate.
Tags
automation Minimum Wage Politics