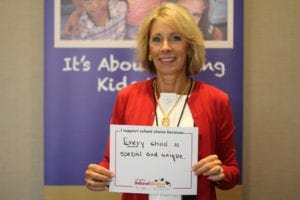 On Wednesday, the Trump administration announced the selection of Betsy DeVos as their nominee for the position of Secretary of Education.

“Betsy DeVos is a brilliant and passionate education advocate,” said President-elect Donald J. Trump. “Under her leadership, we will reform the U.S. education system and break the bureaucracy that is holding our children back so that we can deliver world-class education and school choice to all families. I am pleased to nominate Betsy as Secretary of the Department of Education.”

A native of Michigan, Betsy DeVos has spent decades advocating for school choice reforms and helping underserved children gain access to quality education. Ms. DeVos is chairman of the American Federation for Children whose mission is to “improve our nation’s K-12 education by advancing systemic and sustainable public policy that empowers parents, particularly those in low-income families, to choose the education they determine is best for their children.”

The National Education Association, a public sector teacher’s union, isn’t fond of having a school choice advocate in the White House that could push funds out of failing public schools and into successful charter schools and voucher programs.

The NEA membership relies on a strongly-centralized education system, which DeVos has advocated against. Now, the teacher’s union isn’t going to sit idly by while their power is eroded.

NEA President Lily Eskelsen Garcia released a statement in which she pushes DeVos as a corporatist and makes voucher programs out to be the worst thing to happen to children .. ever:

We have, and will continue, to fight for all students to have a great public school in their community and the opportunity to succeed no matter their backgrounds or circumstances.

“Betsy DeVos has consistently worked against these values, and her efforts over the years have done more to undermine public education than support students. She has lobbied for failed schemes, like vouchers — which take away funding and local control from our public schools — to fund private schools at taxpayers’ expense.

America has continually ramped up spending on education only to see its students fall behind other developed nations that spend less and the NEA has been at the front demanding more spending on the same failing programs while demonizing alternatives such as charter schools and voucher programs.

The NEA represents the same old strategies that have been failing American students for decades and perhaps DeVos will bring a fresh perspective to a stagnant department.