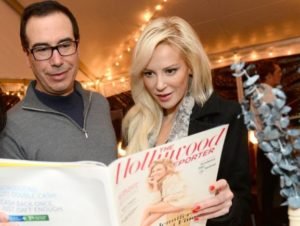 A Film producer and former Goldman Sachs partner is expected to be nominated as the next Treasury Secretary by President-elect Donald Trump.

Steven Mnuchin functioned as Donald Trump’s campaign finance advisor and has now reportedly earned the nod as Mr. Trump’s pick for Secretary of the Treasury.

Steven made a fortune in banking at Goldman, much like his father did but he went on to found the film company RatPac-Dune Entertainment which backed the lucrative X-Men series and the blockbuster Avatar.

Read HERE for all the latest news on Mr. Trump’s administration!

Support Conservative Daily News with a small donation via Paypal or credit card that will go towards supporting the news and commentary you've come to appreciate.
Tags
Louise LInton Steven Mnuchin The Cabinet The Department of the Treasury Trump Administration