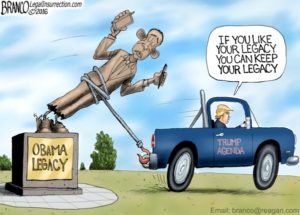 A poll out Monday shows that Americans want Obama’s legacy shredded as quickly as possible with other policy priorities taking a back seat.

A Rasmussen poll of 1,000 likely voters found that Americans prioritized the repeal of Obamacare, filling the Supreme Court vacancy and ditching all of President Obama’s executive orders over other highly-publicized initiatives like building a wall along the southern U.S. border.

Of all respondents, 25% want Trump to tackle Obamacare first. Among republicans 36% wanted that to be the top priority.

Filling the Supreme Court was a close second with 22% of all respondents favoring that initiative and ending Obama’s executive orders came in a distant third with just 9%.

Where did the border wall come in? Fifth – with just 6% of those surveyed making it a priority.

Before the wall, before NAFTA, before most other initiatives, Americans want the pillars of Obama’s presidential legacy undone.

Interestingly, the initiatives Americans desire first may take the longest.

Repealing and replacing Obamacare will be slow and hard-fought while ending Obama’s executive orders could be done day one.

The Supreme Court pick won’t be difficult, but it won’t be fast. While Trump already has a list of possibles, refining that list down to one name will take time.

In all likelihood, a huge swath of executive orders will be dismantled on January 20th or shortly thereafter. A Supreme Court nominee may also be announced that day but will require Senate confirmation before the task is complete.

The repeal and replacement of Obamacare could take months to get through Congress and will likely not be implemented until late 2017 in order to minimize impacts to the health insurance market.