Posted by: Michael R Shannon in Politics October 17, 2016 Comments Off on Republican Party Now Controlled by Depend Caucus

For a guy who’s billed as the next great Republican political wizard, he sure makes a lot of rookie mistakes. 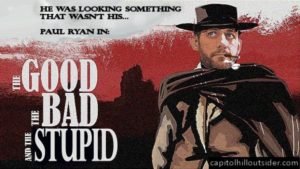 Now Ryan is doing the Hokey–Pokey over Trump’s just–released video “How to Impress Women Like the Stars Do.” I say now, because this is only the most recent example. Ryan earlier was weathervaning over Trump’s Twitter war with the Democrat’s angry Arab. Before that it was Trump vs. the ethnic–supremacist judge. Prior to that it may have been the disabled reporter. Somewhere in there we have Carly Fiorina’s face.

Unless you have a Democrat opposition researcher in the family it’s hard to keep track.

The only thing that’s certain is the joy in the enemy camp as Ryan predictably dances to the mainstream media’s tune and the rest of the Depend Caucus wrings their tiny hands.

There’re a number of problems with Ryan’s performance of the Politically Correct Polka, beginning with the fact it makes him look weak. This confirms what conservatives have been saying for months, but going public demonstrates Ryan’s fecklessness to the entire nation.

Politically Ryan’s weakness is an even bigger mistake for GOP members of the House he’s supposed to be leading. Responding to media inquiries regarding Trump’s shambolic campaign only serves to nationalize House races, which incumbent House members should certainly avoid. House races should stay local.

Incumbents talk about the pork they’ve brought home not the pork–brain at the top of the ticket.

House members, including the Speaker, have no control over presidential candidates. Regularly commenting on the Improv Impresario at the top of the ticket means what happens there also reflects on those members.

It’s the equivalent of the Uber passenger in a self–driving car being held responsible for the robot’s tickets.

Nationalizing a House race is what challengers do to try and ride the coattails of their presidential candidates and overcome the incumbent’s name ID and record within the district.

Ryan’s continuing comments on the Trump race puts pressure on all House candidates to answer Trump questions from local reporters who take their cues from the networks.

This idiocy won’t hurt Ryan — he’s in a safe district, otherwise he wouldn’t be Speaker — but it damages incumbents in marginal districts and it really handicaps GOP challengers. Instead of signing on for color commentary of the Trump race, Ryan should have told national reporters from the very beginning that he is focused on increasing the Republican House majority and he doesn’t have time to be an advisor for the Trump campaign, too.

The media won’t accept that answer, so he’ll be pressed. He repeats those questions are a distraction for House members concentrating on (insert message sound bite). Voters will have a chance in November to decide the presidential race and they don’t need my help to do it.

Then Ryan refuses to answer any more questions about Trump.

The media will tire of badgering him and move on to reliable RINO weasels and backstabbers like John McCain and Lindsay Graham. For proof this technique works we have only to look at Senate Majority Leader Mitch McConnell. He finally shut up about Trump and the media stopped asking.

Ryan’s silence regarding the Trump campaign would allow other House members to do likewise. When a local news poodle asks them to comment on the latest Trump communication adventure, all they have to do is say, like Speaker Ryan, I’m concentrating on my own race where (insert political BS). Voters can make their own decision regarding Trump and Hillary in November.

Then they can shut the heck up.

Ryan’s failure to adhere to this obvious and sensible strategy calls into question his motives. Is he trying to appeal to GOP contributors that might otherwise stop giving? If so, he can tell them in private what I’ve written here. Does Ryan want to cozy up to the next administration? There’s probably a better chance for good relations with Hillary than with Trump. Or does Ryan want to be the national GOP leader acceptable to the media? He can ask Mitt Romney how that worked out.

A wise friend contends Ryan’s diarrhea of the mouth isn’t a mistake — it’s a fallback plan. Originally, Ryan wanted to block Trump’s nomination so the party would turn to him as nominee without subjecting him to a primary campaign.

Now Ryan just wants to defeat Trump regardless of the cost to the nation. Gov. Mike Huckabee contents the Republican RINO and consultant complex isn’t afraid Trump will lose.

I’m beginning to think the governor and my friend are correct.

0
Previous: WikiLeaks Versus The Liberal Press; Odd Political Times
Next: How To Make “Proto-Putty” (Modified Oogoo)