According to a plea of support by the PragerU team, YouTube has placed 10% of their videos on the restricted category which could limit access to the educational videos.

We’ve posted PragerU’s videos on CDN on many occasions. Their videos feature informational messages on the economy, taxation,  college costs, climate change, terrorism and more – none of which anyone would hesitate to show a family member.

So exactly what kind of content has YouTube decided should be restricted (see if you can spot the ideological bias)?

Why Did America Fight the Korean War?
Is America Racist?
The Most Important Question About Abortion
Don’t Judge Blacks Differently
Are The Police Racist?
Why Don’t Feminists Fight for Muslim Women?
Who’s More Pro-Choice: Europe or America?
What ISIS Wants
Why Are There Still Palestinian Refugees?
Are 1 in 5 Women Raped at College?
Islamic Terror: What Muslim Americans Can Do
Did Bush Lie About Iraq?
Who NOT to Vote For
Do Not Murder
Israel: The World’s Most Moral Army
Radical Islam: The Most Dangerous Ideology
Why Do People Become Islamic Extremists?
What is the University Diversity Scam?
He Wants You
Israel’s Legal Founding
Pakistan: Can Sharia and Freedom Coexist?

If you’d like to support their efforts you can also GO HERE and donate to keep more great videos coming. Or, if you can’t afford to donate, just consider visiting their sponsors through the ads on the videos. That’s how they make money to produce more videos. 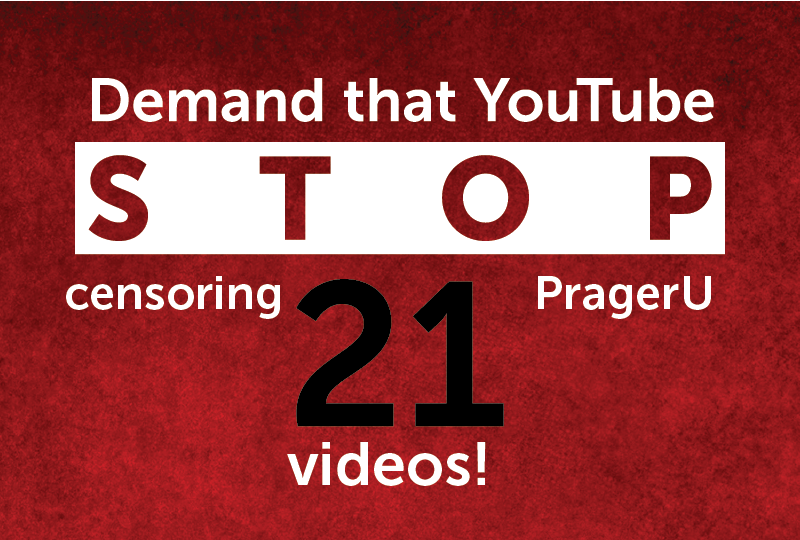 Support Conservative Daily News with a small donation via Paypal or credit card that will go towards supporting the news and commentary you've come to appreciate.
Tags
censorship PragerU YouTube

Not A Skit: Colbert Tries To Goad AOC Into Running For President

Army Chaplain Under Investigation For Sending Pro-Life Message To Troops