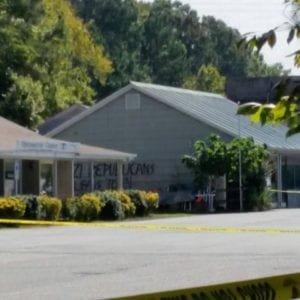 A building used for political organization in Hillsboro, North Carolina was vandalized with a swastika, hateful rhetoric and a bottle containing a flammable substance – the twist? The building is a Republican Party campaign office.

According to officers with the Hillsborough Police Department, the building at 347 Ja-Max Drive was vandalized overnight with graffiti and a flammable substance. Officials say the graffiti included a swastika and the words “Nazi Republicans leave town or else.” The words were painted in black on the side of a business located adjacent to the headquarters. 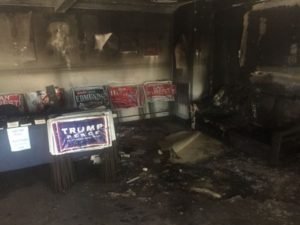 The “or else” after the offensive name calling is a terroristic threat which, along with the building being leased by a national campaign, has brought in the Bureau of Alcohol, Tobacco, Firearms and Explosives (BATFE) to help with the investigation.

The fire damaged the building’s interior and furnishings early Sunday morning before extinguishing itself, but no groups have yet claimed responsibility for the attack. Local police along with BATFE are currently investigating. Anyone with information is asked to contact Investigator Jon Purvis by phone at 919-732-9381, ext. 37.

Black Lives Matter has held a few protests in nearby Durham, but no damage to property has been reported from those demonstrations.

Hillary Clinton tweeted that the act is unacceptable, although it is hard to discern if that is not as bad or worse than “deplorable.”

The attack on the Orange County HQ @NCGOP office is horrific and unacceptable. Very grateful that everyone is safe.

Support Conservative Daily News with a small donation via Paypal or credit card that will go towards supporting the news and commentary you've come to appreciate.
Tags
Hillsborough North Carolina Republican Party vandalism