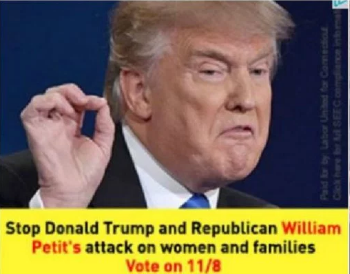 A labor union head has resigned after he led an evil and hateful attack ad that attempted to tie Donald Trump and Dr. William Petit to “attacks on women and families.”

The Executive Director of the SEIU Connecticut State Council, Paul Filson, stepped down after having put together the ad aimed at Petit who was the sole survivor of a brutal home invasion in 2007.

Dr. Petit’s wife and two daughters were killed in the home invasion.

“To post something that says I attack women and families I thought was about the lowest of blows,” Petit said in a press conference on Wednesday.

“I’ve worked over the past nine years to honor the memory of my family and the whole mission of what we do. We’ve tried to come up with programs we felt would honor Jennifer, Hayley, and Michaela, would be things that they would want us to do,” Petit said. “For a shadowy political organization to blatantly ignore that work and publish a despicable ad is reckless and incomprehensible.”

Dr. Petit is running for the 22nd district Connecticut House seat against Democrat incumbent Betty Boukus who released a statement distancing herself from the despicable ad, “I am horrified by the tasteless and offensive attack ad against my opponent. It was produced by a third party with no connection to my campaign, without my knowledge, and without the involvement of anyone associated with my campaign.”

SEIU has also terminated DKC – the consulting group involved in the making of the advertisement against Petit.