First a little history lesson for those of you who never paid attention in history class. Back in the 1920’s and 1930’s when Adolf Hitler was coming into power he put together a group of men who were known as the brown shirts who would go out and destroy property, beat up people and cause mayhem towards anyone who dared to disagree with Hitler, they were dressed in brown shirts, hence the name.

Now in 2016 it seems that Hillary Clinton has brought them back to do the same to people who disagree with her. Last week a video came out of Hillary cronies talking about how they sent people into Trump rallies to cause trouble and make Trump look bad. They also recruited mentally ill people and paid them to cause violence at Trump rallies. But why should anyone be surprised, the left has been doing this for years, there is no civil discourse when it comes to the left.

Recently in North Carolina Hillary’s brown shirts firebombed GOP headquarters and the words “Nazi Republicans, leave town or else” were also painted on a nearby building. Check your history books, that is exactly what Hitler used to do, notice how they call Republicans Nazi’s when they are using the same tactics as Hitler, who’s the real Nazi?

Scott Foval, the national field director for Americans United for Change, was caught on tape discussing with an O’Keefe operative, who was posing as an intern, a strategy that included sending plants into Trump rallies to pick fights with his supporters.

“I mean, honestly, it’s not hard to get some of these assholes to pop off,” he says in the video. “It’s a matter of showing up, to want to get into their rally, in a Planned Parenthood T-shirt. Or ‘Trump is a Nazi,’ you know. You can message to draw them out, and draw them out to punch you.”

Also in Hollywood California a brown shirt took a sledge hammer and a pick ax and proceeded to destroy Donald Trumps star on the Hollywood walk of fame. Why would someone want to do that? What purpose does it serve? It just shows you the mentality of the Hillary Clinton voter.

What amazes me is that they always get away with it; I guess the fact that they have the media on their side covering up for them is a good answer. I have to admit they are very good at what they do, blaming the right for the very things that they are guilty of is amazing. For years the Left has been calling the Right intolerant, when it is the Left who tries to destroy anyone who doesn’t backup their crazy views. 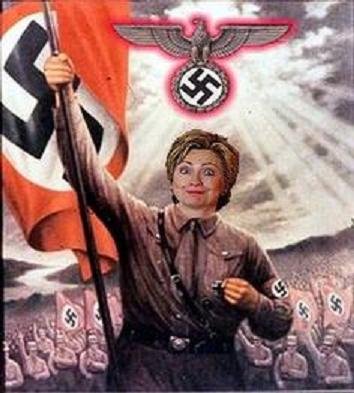