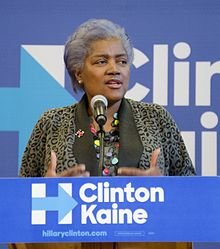 While it is not clear how Ms. Brazile gained access to the questions, one from a CNN democratic primary debate and another from a CNN town hall event, the cable network has now severed all ties with her.

In a statement, CNN spokeswoman Lauren Pratapas said that on Oct. 14, the network accepted Brazile’s resignation.

“On October 14th, CNN accepted Donna Brazile’s resignation as a CNN contributor. (Her deal had previously been suspended in July when she became the interim head of the DNC.) CNN never gave Brazile access to any questions, prep material, attendee list, background information or meetings in advance of a town hall or debate. We are completely uncomfortable with what we have learned about her interactions with the Clinton campaign while she was a CNN contributor,” Pratapas said.

Some speculation – or CNN-fostered spin – points towards Roland Martin, a co-moderator of the Town Hall event. Whether Roland fed Brazile the question or he’s being thrown under the bus remains to be seen.

WikiLeaks announced the start of “phase 3” of its U.S. Election coverage Sunday night. One can only imagine all the media, party and campaign officials that are dusting off their resumes ahead of what should be the hardest hitting publications by the transparency group.