With apologies to George Ramos, this year the first presidential debate is the Big Enchilada. Independent voters will finally be tuning in to see both candidates boca–y–boca. This cumulative first impression will probably decide the election.

And what will Independents be concerned about? Many are participating in betting pools based on the exact time Hillary will cough, with over–unders on duration and intensity. 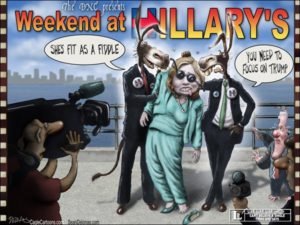 Not since Ronald Reagan’s second debate with Walter Mondale has candidate health been a primary topic. That was in 1984 and health was a byproduct of the first debate after Reagan appeared to be a quart low on formaldehyde. His answers were sometimes confused and the Gipper looked old.

The disastrous performance seemed to confirm the mainstream media’s unsubtle attempts to portray Reagan, at 73, as too old and feeble to function during a second term.

Mondale knew the election would ride on Reagan’s performance in the rematch. Reagan knew it, too. When he was asked a question designed to remind voters of the first debate and put him at a disadvantage, the Gipper defied expectations and won the election with a single answer:

Moderator: Mr. President, I want to raise an issue that I think has been lurking out there for 2 or 3 weeks and cast it specifically in national security terms. You already are the oldest President in history…President Kennedy had to go for days on end with very little sleep during the Cuban missile crisis. Is there any doubt in your mind that you would be able to function in such circumstances?

Reagan: Not at all. I want you to know that also I will not make age an issue of this campaign. I am not going to exploit, for political purposes, my opponent’s youth and inexperience.

The surprised laughter of the audience, and even members of the media, washed away any hope Mondale had of winning.

Clinton, at 68, is actually the younger of the two candidates, but that hasn’t kept her campaign out of the intensive care unit for the last two weeks. Her cough. Her concussion. And her Crazy–legs Hillary spaz–out as she was tossed into a van are causing voters to wonder if they are “Ready for Hillary” or the staff at Johns Hopkins.

Hillary may have to address her health, but it won’t be with humor. She would either have to bring a water bottle, surgical mask or Taser on stage as payoffs for her multiple explanations and changing health diagnoses, and that’s two jokes too many.

But the health question is not guaranteed.

The media asked Reagan a loaded question because it wanted him to lose. These Democrats–with–bylines would much prefer to avoid Hillary’s health, because it would help Trump. As long as Hillary isn’t brought to her chair riding on a gurney or rolled on stage like a barrel of Oktoberfest beer she’ll be fine until the questions start.

I’ve been told that in a break with past debates, Hillary will be allowed to have one ornamental shrub to her left, mostly to obscure the saline drip. And both candidates will be allowed one bottle of water or Robitussin.

The first moderator, Lester Holt, has announced debate topics for the Sept. 26th event: America’s Direction, Achieve Prosperity and Securing America. None of which lend themselves to asking if she can “power through” four years in the Oval Office. The segments will cover 30 minutes each broken into two 15–minute portions. During the pause one medical professional will be allowed to approach Hillary.

The debate will be carried by the three broadcast networks, cable news networks and Univision — which will save money by having all Trump’s Spanish subtitles read: “Trump: ‘All Mexicans are rapists.’”

Right the first debate is predicted to set a record with total viewers approaching 100 million. I haven’t placed any bets myself, but I am wondering will she cough? And when?

More than one observer has predicted Clinton will have so much codeine in her she’ll be lucky to talk, much less cough. This stands to reason since a codeine overdose is not all that different from the usual Hillary: Slow, labored breathing with cold, clammy skin.

Trump’s job will be to keep the pressure on Hillary and not allow the debate to turn into a wonk–fest where she dominates with an avalanche of minutia and acronyms. If he’s witty and relaxed, while she’s leaden and uptight, Trump can count it a victory.

Support Conservative Daily News with a small donation via Paypal or credit card that will go towards supporting the news and commentary you've come to appreciate.
Tags
2016 Election News Health and Fitness Politics