In recent weeks, polls had showed Trump making significant headway in the tarheel state, but a recent poll may indicate a trend reversal.

A CBS/YouGov poll of 1,088 likely voters shows Trump losing his temporary hold on North Carolina by a 4-point margin which increases Clinton’s lead over Trump in the same poll published  June 24th where Hillary had only a 2-point advantage.

Looking at the overall trend within the same polls, CDN has decided to return North Carolina to “toss-up” status from a shortly held “leans GOP.” The poll asked respondents why they were voting for the candidate they chose and the news isn’t great for either candidate. 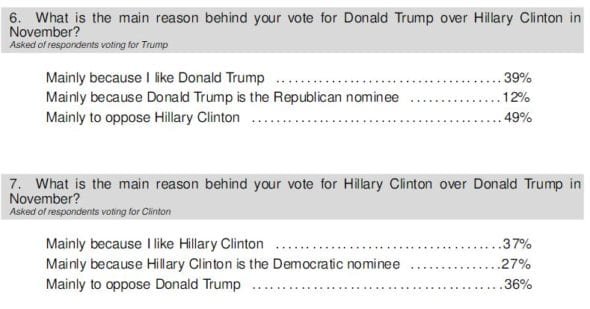 If the numbers are evaluated purely on the “for vs. against”, Trump scores 51% of voters are voting for him while 49% are voting against Hillary. Hillary’s numbers would be 64% voting for her, while only 36% are voting to oppose Trump.

Tearing the numbers apart further reveals a more-important fact. 39% are voting for Trump because they like him, only 37% of Hillary voters are doing so for the same reason. The rest are either out of party loyalty or as a rebellion vote against Trump. Those voters are less motivated to show up on election day.