An unidentified person has been shot during Charlotte, NC protests over the shooting of an allegedly armed black man yesterday.

Reports say that the man was shot by another person attending the protest and that police were not involved. The victim is now reported to be in critical condition.

The protest was being held over the police-involved shooting of Keith Lamont Scott in Charlotte.

Mr. Scott was killed by a police officer in a parking lot Tuesday as officers searched for another man named in a warrant they were trying to serve.

Scott’s family insists that Keith was holding a book while evidence, witness accounts and the police reports all say something quite different.

Witnesses support the officers’ claim that Scott was armed.

Officers repeatedly told Scott to drop his handgun, the chief said, but he didn’t. Officer Brentley Vinson, who is black, then shot him.

To protest the alleged injustice against Keith Scott, protesters looted the store of the Charlotte Hornets NBA basketball team – nothing says justice like stealing a few jerseys.

Hillary Clinton today poured gasoline on a fire that got one man critically injured, at least four police officers hurt and put many other black Americans in danger.

Using her twitter account, Clinton refuted the evidence, witness accounts and the police reports with no evidence whatsoever: 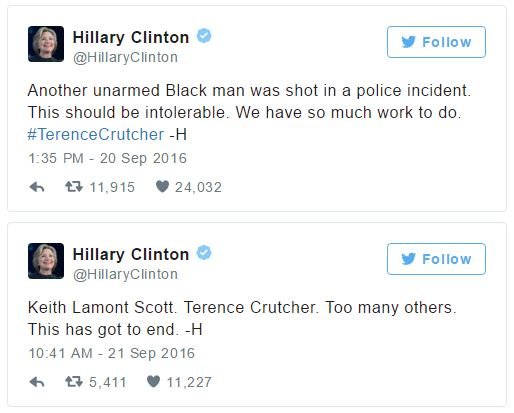 Scott was armed according to police and witness accounts, but Clinton has chosen the uninformed protesters position. Her actions raise grave questions about her own motives and judgement.

How could a leader discount all fact to back unsupported claims?

How could a presidential candidate ignore witnesses and trusted law enforcement officers while supporting a rioting mob?

What motive could Mrs. Clinton have to ignore facts?