It’s been said for decades that the real reason democrats pretend to support immigration is to build-up their cadre of loyal voters and now a government email has been discovered that says exactly that! 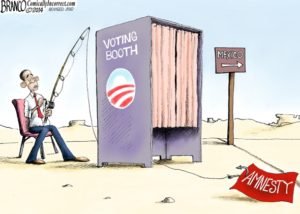 An email from a U.S. Citizenship and Immigration Services was given to Fox News that shows an election year push to get more immigrants turned into citizens by using taxpayer money to fund overtime.

“The Field Office due to the election year needs to process as many of their N-400 cases as possible between now and FY 2016,” reads the email, which was disclosed to FoxNews.com by Sen. Ron Johnson, R-Wis., who chairs the Committee on Homeland Security and Governmental Affairs.

“If you have cases in this category or other pending, you are encouraged to take advantage of the OT if you can,” the email continues. “This will be an opportunity to move your pending naturalization cases. If you have not volunteered for OT, please consider and let me know if you are interested.”

Tbe N-400 form, or Application for Naturalization, is part of the process for legal immigrants to follow to gain U.S. Citizenship.

The Department of Homeland Security is under greater scrutiny after it was discovered that almost 900 immigrants were wrongly granted citizenship.

Rushing applications through instead of being more careful is likely to increase the number of poorly-vetted applications instead of securing the nation from possible terrorists.

Dan Stein, president of Federation for American Immigration Reform said that “in the pursuit of a partisan advantage, one party has decided integrity in the system is irrelevant. They don’t really care about checking backgrounds or verifying status and eligibility – it is more about increasing the number of eligible voters in the upcoming election.”

Support Conservative Daily News with a small donation via Paypal or credit card that will go towards supporting the news and commentary you've come to appreciate.
Tags
2016 Election News Dan Stein Democrats Immigration The Department of Homeland Security