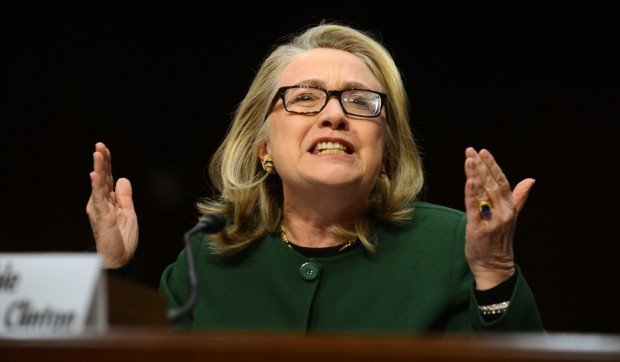 Hillary Clinton recently called Trump supporters “a basket of deplorables.”  Isn’t hat like the proverbial pot calling the kettle black? She’s the one who is deplorable.

READ: Hillary Uses ‘Basket of Deplorables’ more than once

This is a woman who threw ashtrays and expensive vases at Bill in a rage in the Whitehouse which is deplorable behavior. This is a woman who lies so much she has to lie when telling the truth which in itself is deplorable. This is a woman fond of using the ’F’ word frequently and uses it to debase and insult secret service agents and anyone else who crosses her path. According to former secret service agent Gary Bauer, Hillary debased agents so much it drove them to become alcoholics.  Some say it is her constant debasement of Vince Foster that led him to suicide. I can believe it.

This is a couple who stole furniture from the Whitehouse for their mansions which is deplorable. That furniture belongs to the people’s house. This is a woman who deleted  30,000 subpoenaed  e-mails as evidence in an FBI investigation which is deplorable. That’s destruction of evidence and concealment  which is a crime in itself. She then turned over another 15,000 e-mails and said that was it only for the FBI to find another 14,000. Hilary told FBI investigators she did not recall 25 times. If she is telling the truth then she is not fit for office and if she is lying to the FBI agents she is not fit for office. Either way it is deplorable. https://www.americanpoliticnews.com/breaking/based-fbi-interview-hillary-either-total-liar-dumbest-person-alive/

This is a woman who sold U.S. uranium rights to Russia through her criminal Clinton Foundation which is funded by laundered money through Canada by foreign countries seeking access which is deplorable.

Let’s not forget Benghazi where she could have saved the ambassador and the other three by evacuating when the ambassador asked for help 600 times, but gave the order for the troops to stand down instead. She then lied to the parents of the soldiers and ambassador standing next to their caskets saying it was from a video when she knew that night it was a terror attack. That alone is deplorable.  Then later on has the unmitigated gall to make the deplorable statement “What difference does it make?”MENTAL BREAKDOWN: Confused Hillary Tries to Remember Where Benghazi Is But Can

This is a woman who says she is in perfect health  yet constantly falls down, has public seizures and coughing fits that last for several minutes, memory lapses and often needs people to hold her up and needs pillows  to support her when sitting down.

So Hillary don’t  go calling Trump supporters a basket of deplorables without looking in the mirror first to see a big deplorable basket case yourself.

Click here: Hillary Clinton pegs half of Donald Trump’s supporters as a ‘basket of deplorables’ – AOL