Gasoline prices on the east coast are likely to spike over the next few days after a pipeline sprung a leak in Alabama.

6,000 barrels of gasoline have spilled from the Colonial Pipeline in a leak that started on September 9th and the resultant outage could affect prices and availability beginning in just the next few days.

The spill occurred near Helena, Alabama just south of Birmingham and repairs began on Friday afternoon. The company expects flow to restart sometime next week.

This afternoon, working in consultation with Unified Command, Colonial Pipeline will begin excavation operations to repair the impacted section of pipe on Line 1. This work will continue throughout the weekend, with Line 1 projected to restart next week.

The Colonial pipeline is one of two major pipelines that transfer fuel from refineries in Texas to facilities in Georgia, the Carolinas, Virginia, Delaware, Pennsylvania and New York providing about 40% of the regions gasoline. 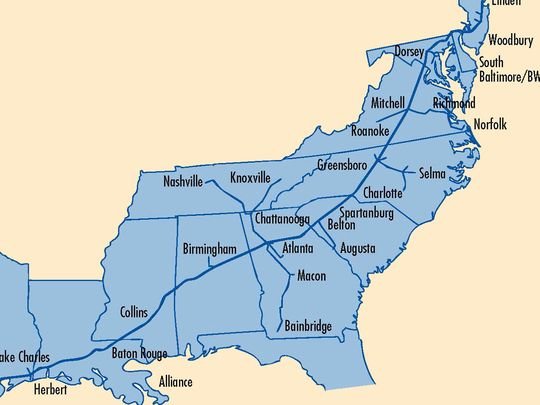 Whether a shortage is seen as a result of the leak largely relies on how long the repairs take and whether drivers panic and make a run on gas stations to hoard fuel ahead of a perceived supply problem.

Governors in the southeast have already declared states of emergency to get ahead of the possible shortages.

The governors of Alabama, Georgia, North Carolina and South Carolina have each declared a state of emergency this week allowing truckers to work longer hours to avoid fuel shortages. Some suppliers have begun shipping gasoline by boat from Houston to New York.

The east coast is currently overstocked on gasoline. A glut in the region could help eastern states weather the pipeline outage.

Colonial Pipeline Co’s days-long shutdown of the main line that moves gasoline to the Atlantic Coast from the U.S. Gulf Coast has had the unintended effect of starting to alleviate the glut of domestic gasoline supply, traders said

Colonial has also made provisions to use another of its lines to ship gasoline. The colonial is made up of four separate lines. Line one is responsible for the spill and caries only gasoline. Line 2 is used for other distillates, but is cross-over capable with line one. Colonial has allocated space on line 2 for gasoline to ease the shortfall.

If repairs progress as expected the most likely outcome is a short-term 10-15% spike in prices at the pump.

Support Conservative Daily News with a small donation via Paypal or credit card that will go towards supporting the news and commentary you've come to appreciate.
Tags
Colonial Pipelines