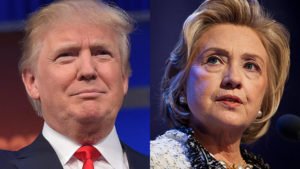 As the 2016 Presidential campaign makes its turn into the homestretch, Donald Trump and Hillary Clinton will battle it out at Hofstra University on Monday night – and the candidates are neck-and-neck.

Polls show that Donald and Hillary are basically tied at the national level and extremely close in the electoral college count. Now they will meet in Hempstead, NY to discuss the issues and attempt to gain the upper hand in the final 43 days until the country picks its next president.

Hillary’s strategy seems focused on tripping-up and angering Trump. Her team is working hard to find ways to anger him in hopes of getting him to insult some important voting block. It isn’t a terrible strategy, but its been tried and hasn’t been all that successful.

Donald, it has been reported, is working a two road strategy. He may take the high road, stay on message and simply wait for Hillary to break into one of her well-known coughing fits, go off on coal miners, white people or despicable Americans or he might go full-on attack mode.

Hillary has given one of her prized front-row tickets to outspoken anti-Trump billionaire Mark Cuban. Rumors swirled that Trump might return the favor by putting Gennifer Flowers in the front row next to Mr. Cuban. Trump’s campaign has said that the report is untrue, Flowers has not been invited nor given a ticket. That leaves only Clinton playing childish games with attendee tickets.

Regardless of who is or isn’t in the front row, the show is going to be spectacular. There has never been a debate where it was more possible for viewers to experience weird and otherwise cringe-worthy events:

With all but the last possibility, get out the popcorn, fix up the drinks – America is likely to have one of the most entertaining debates in .. well .. ever.

Won’t be near a TV tonight? Watch the Live Stream HERE