Evidently there’s a significant subset of the female population angry and resentful because they didn’t have more opportunity to be exposed to STDs in their younger years.

Lyz Lenz, in particular, moans she “still has a stain” on her heart because she remained a virgin until she married. I would have thought that beat worrying about stains on your clothes when mom met you at the door after a date, but that does not appear to be the case here.

I came across Lenz complaint in the “Acts of Faith” section of the Washington Post, which as far as orthodox believers are concerned is the Alex Jones of faith aggregators. 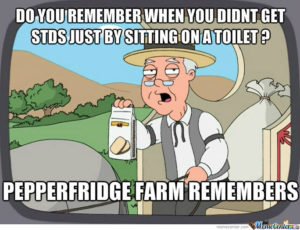 Lenz and her posse appear to believe chastity, or at least striving for chastity, has left them “crippled” with an overwhelming feeling of “fear” when it comes to their bodies and sex. On the Sojourners website she wails, “I’m only now coming to grips with — damaging expectations of myself, men, and sexuality — beliefs that have cost me love, friendship, and given me a life of shame.”

Making me wonder if Lenz ran any of this by her husband before she opened up to the world?

The proximate cause of this angst is a 1997 book by 21–year–old Joshua Harris called “I Kissed Dating Goodbye.” In the book Harris urged both men and women to remain virgins until marriage, something Lenz, for reasons that are unclear, appears to believe causes rape and domestic violence.

Personally, I prefer not to take theology advice from men barely in their twenties. If Jesus could wait until he was 30 to begin his ministry, where’s the fire for Harris? The book was a big hit for the author and the message made an equally big impression on youth ministers across the evangelical world.

Lenz terms the movement that grew from the book the “purity culture,” which appears to be something desirable in yoghurt, but not sex. Some of the charges Lenz lays at the feet of purity culture include: men who molest, men who rape and men who abuse; sex is only for procreation; sex is to keep your husband happy; women are purely sexual objects; sex is shameful; failure to sexually stereotype minority women; failure to command homosexuals to stay pure; failure to consult homosexual pastors; and too many fusty Bible rules about sex.

As you can see, there’s a problem with logic in this indictment. I think the real problem for Lenz is she hung around with too many heathens while she was getting her Masters of Fine Arts degree. Any time you see the prefix “cis” in a story, there’s a leftist hiding somewhere.

We are supposed to be set apart. As Wesley Pruden says, you could look it up. Practicing Christians will always be out–of–step with the secular culture. If Lenz lets higher education set the benchmark for a complete life, she is going to be seething in the pew or a Unitarian.

Some knuckle–head youth pastor could well have told her that any sex before marriage left a woman forever ruined. That only makes him as big a heretic as Gene Robinson. We all fall short of the Glory of God and the gift of Grace means redemption is available for all. No one is permanently soiled, unless by choice.

In all things human it’s a matter of degree. It’s quite a gulf between the young man or woman whose hormones got the best of them on the way to the altar and the women who now claim to be proud members of the No Shame Movement.

When CBS reports new data from the Centers for Disease Control showing cases of antibiotic–resistant cases of gonorrhea have quadrupled, my first reaction is not “give me some of that!”

What sort of alternative did Lenz miss? Hook–ups? Campus coma culture? Friends with benefits? Shacking up?

The sexual revolution that Lenz conscientiously objected to was not a Woodstock idyll with indoor plumbing. If Lenz is interested in seeing where the alternate choice leads, instead of relying on faculty lounge fantasies of sexual fulfillment, she should spend some time among unmarried mothers.

There the abuse is physical, not mental and the casualties of the sexual revolution, young and old, litter the landscape. She might just decide her heterosexual life “with two small children and a husband I deeply love” wasn’t such a bad choice after all.