The Obama Administration continues its eight-year assault on the middle-class and lower income citizens. The Department of Labor finalized its recommendations to redefine a “fiduciary” in the retirement income space, and the implications will be significant for restricting investment options and advice for most Americans who need it most. 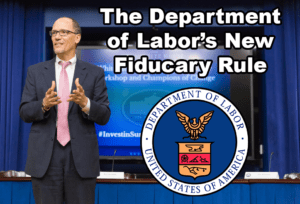 In 1974, Congress passed the Employee Retirement Income Security Act, which addressed many concerns with regard to company sponsored defined benefit (pension) plans. It established minimum standards for such plans in the private sector, and spelled out the extensive rules on the federal income tax effects of all such plans and transactions within those plans. It also required disclosure of financial and other information to plan participants and beneficiaries, and established standards of conduct for plan fiduciaries.

Investopedia presents the traditional definition of a fiduciary. “A fiduciary is responsible for managing the assets of another person, or of a group of people. Asset managers, bankers, accountants, executors, board members, and corporate officers can all be considered fiduciaries when entrusted in good faith with the responsibility of managing another party’s assets.” This is basically the definition employed by ERISA for private sector pension plans, and is entirely logical and appropriate.

What Obama’s Department of Labor is now doing, is redefining the term. The fiduciary duty relationship will now expand to include investment advisory and some brokers including insurance brokers. The effect of the rule will have wide implications for whoever serves as your investment advisor, even for self-directed IRAs (Individual Retirement Accounts) or advisors who provide just one-time guidance or recommendations. 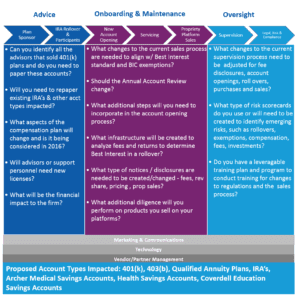 John Berlau, wrote in American Spectator recently, “The term would apply to many financial professionals who do not even give advice, such as custodians of self-directed IRAs. Since those deemed ‘fiduciaries’ would have to follow the mandate to only handle investments that adhere to what the government deems as savers’ ‘best interests,’ individual choice of holdings in IRAs and 401(k)s would be sharply restricted.”

It is logical that those who manage assets are classified as fiduciaries, since they’re responsible and accountable for said assets. Those who simply proffer advice, which the client may or may not follow, are completely different. Metaphorically, it would be like classifying your father as a government recognized car salesman for giving advice on which car to buy, and regulating and monitoring him accordingly.

The Financial Planning Coalition describes the changes, “Under the Department of Labor (DOL)’s proposed definition, a “fiduciary adviser” is any individual receiving compensation for providing advice that is individualized or specifically directed to a particular plan sponsor (e.g., an employer with a retirement plan), plan participant, or IRA owner for consideration in making a retirement investment decision. Such decisions can include, but are not limited to, what assets to purchase or sell and whether to rollover from an employer-based plan to an IRA. The fiduciary adviser can be a broker, registered investment adviser, insurance agent, or other type of adviser. It is important to note that the DOL will determine who is a fiduciary based not on the adviser’s title, but rather on the advice provided to the client.” 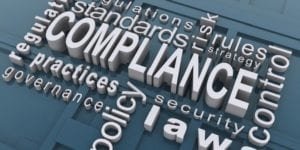 The end results will be a) less flexibility for individuals managing their retirement accounts, b) fewer options available to such individuals, and c) less information and education that the investment professional can legally provide investors.

Financial Planning magazine published a piece a few months ago explaining the deleterious effects of the new rule. “Unlike the DOL’s insistence on a one-size-fits-all service solution to retirement accounts, we believe in allowing investors (not the government) to choose what type of investment relationship and structure is best suited to their needs and goals. We believe in full investor protections and in freedom of choice for investors. The DOL’s rule actually restricts choice. Investment products, services and account structures have expanded dramatically in response to investor demand.”

“We can all agree that investors are best served by working with a highly trained and professional financial advisor who has access to the best products and services available. We also believe advice and counsel should be available to all investors, not just some.  Under the new rule, some smaller investors could be pushed into automated solutions that are less transparent and do not include an advisor.”

The new DOL rule will also significantly effect those who offer financial advice electronically or via broadcast, like Dave Ramsey. The immensely popular radio personality who renders insightful and common sense-based financial advice would be deemed a “fiduciary” and rendered handicapped in what he can and cannot say, even if it’s in the best interest of his callers and listeners. The First Amendment to the Constitution has been a guarantor of free speech, but as with all of our citizen’s rights, free speech is being whittled away by the government, unaccountable bureaucrats, and the courts.

Rep. Phil Roe (R-TN), chairman of the Education and the Workforce Subcommittee on Health, Employment, Labor, and Pensions says of the new rule, “In today’s economy, too many families are struggling to save for retirement. That’s why it’s crucial Americans have access to the retirement advice they need to make the best decisions for the future. Unfortunately, the administration’s misguided rule does just the opposite. This new regulatory scheme will hinder access to retirement advice for low- and middle-income families and make it harder for small businesses to help their employees plan for retirement.” 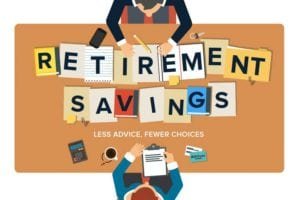 Rep. Ann Wagner (R-MO), who serves on the Committee on Financial Services concurs. “The DOL’s fiduciary rule hurts those it claims to protect: low- and middle-income families who are looking for sound investment advice in the midst of a savings crisis. The unquestionably flawed rule raises costs, limits choices and restricts access to investments for hardworking Americans. The fiduciary rule is ObamaCare for retirement savings.”

The new rule is scheduled to be phased-in starting April of next year with full implementation in January, 2018, in spite of efforts by the House and Senate to defund it. The only likely way to prevent its implementation is by the outcome of the presidential election. Hillary Clinton, in spite of her love affair with Wall Street, supports the rule, while Donald Trump does not. He has indicated he would prevent its effectuation.

In the meantime, individual investors should exercise their temporary freedom by investing retirement assets as you desire, before the government tells you how to If you have a 401(k) to rollover, now is the time to do it. Don’t wait until your options are diminished.

Support Conservative Daily News with a small donation via Paypal or credit card that will go towards supporting the news and commentary you've come to appreciate.
Tags
DOL Fiduciary Rule Retirement Planning