It seems ironic that the day after we celebrated our 240 years of Independence, that we would witness the complete collapse of the rule of law in our fair republic. Tuesday it was announced by the FBI that they would not file criminal charges against former Secretary of State Hillary Clinton for the crimes she committed against state security – crimes that the FBI admits she committed.

James Comey, Director of the Federal Bureau of Investigation (FBI), said at a press conference on July 5th, that he will not recommend an indictment against Clinton. This, in spite of the fact that the FBI had “evidence” that she violated laws pertaining to the handling of classified information.

The applicable laws are contained in the Espionage Act, specifically Section 793, subsection (f), which lists, ”Gathering, transmitting or losing defense information” among those crimes for which the perpetrator “shall be fined under this title or imprisoned not more than ten years, or both.”

Director Comey said that 110 of Clinton’s emails were classified at the time they were sent. And according to the Washington Times in February, another 80 were either marked “secret” or “confidential,” and were of such sensitive nature that national security could have been jeopardized had the emails been hacked and subsequently sold or leaked.

And apparently they were hacked. According to a report this week, beginning in 2011, the Russians began monitoring Romanian computer hacker Marcel Lazăr Lehel (aka Guccifer) after he attempted to break into the computer system of the Russian funded RT television network.

After monitoring Guccifer, the Russians were reportedly able to record his actions, which allowed the Russian intelligence analysts, in 2013, to not only detect his breaking into the private computer of Secretary Clinton, but also break in and copy all of its contents as well. Shortly after Russia obtained Clinton’s emails, they released a limited amount to RT TV which were published in an article in March 2013, titled “Hillary Clinton’s ‘hacked’ Benghazi emails: FULL RELEASE.”

In fact, in October, 2015, the Associated Press reported that, “Hillary Clinton’s private email server maintained in her home while serving as secretary of State was possibly hacked by Russia-tied authorities, and others, on five separate occasions.” Guccifer told Fox News last month that he knows of at least 10 others, beside himself and Russia, who hacked her emails.

The Washington Times reported last month that the Former Secretary of State did break department rules by setting up her own secret email server. Steve Linick, the Inspector General appointed by Obama, sent a report to congress on Wednesday, which detailed how she failed to report hacking attempts, and cavalierly dismissed warnings that she should switch to her government email account.

In his testimony to congress on Thursday, Director Comey stated, “A reasonable person would know that,” responding to a question regarding the private email server and reporting hacking attempts. Based on our own FBI Director, Hillary Clinton is not a reasonable person, since she failed to comply with directives on both accounts. In his brief news conference on Tuesday, Comey described the former Secretary of State as being “grossly negligent.” 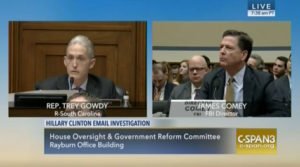 Gowdy went on to illustrate why those lies are significant. He asked the Director, “False exculpatory statements are used for what?” The Director responded, “They are used either in the substantive prosecution or for evidence of intent in a criminal prosecution.” Gowdy responded, “Exactly. Intent and consciousness of guilt.” 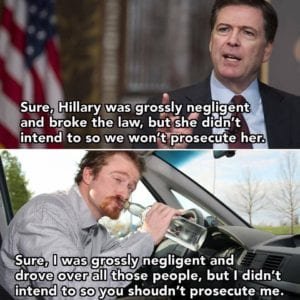 This is significant since Comey in his news conference on Tuesday claimed Clinton “didn’t intend” to break the law. Yet by his own testimony to the House Oversight Committee, the intent was there, as clearly manifested by Clinton’s consciousness of guilt and false exculpatory statements (lies). General David Patreaus did far less, yet the FBI brought him up on felony charges for not safeguarding classified information. And just last year the DOJ successfully prosecuted Naval Reservist Brian Nishimura for having classified information on his personal electronic device. Sound familiar?

Former DOJ prosecutor Andrew McCarthy points out, “Hillary Clinton checked every box required for a felony violation of Section 793(f) of the federal penal code (Title 18): With lawful access to highly classified information she acted with gross negligence in removing and causing it to be removed it from its proper place of custody, and she transmitted it and caused it to be transmitted to others not authorized to have it, in patent violation of her trust.”

“The whole thing stinks to high heaven,” said Dan Metcalfe, the founding director of the Office of Information and Privacy within the Department of Justice and onetime chief DOJ official for overseeing Freedom of Information Act (FOIA) matters. She broke the law. And by her lies and obfuscation, clearly intended to do so. Any “lesser” person would be indicted and, based on the evidence made public, would be convicted.

What is so frightening about all of this, is that it shows that people of influence and means are not held accountable for their legal infractions. Meanwhile she still is running for president, and could well be Obama’s successor. Yet in her official capacities, she wantonly ignores laws, dismisses threats and concerns, lies to congress and the American people, and clearly thinks she’s above the law. If she wins in November, the first lie she will utter to the world will be when she places her hand on the Bible and promises to “uphold and defend the Constitution.”

As a good friend of mine said this week, “One law for me, and another for thee, peasant!” This kind of elitism and concomitant assumption that one can break whatever laws and restraints there are for the protection of the republic, indicates she’ll likely be an Obama on steroids; no regard for laws, no regard for constitutional restraints, no regard for what’s right for the nation.

When one is convinced they’re above the law, there is no one they are accountable to, as they flaunt their power and evade personal responsibility and accountability for their actions. Director Comey was right, it’s “gross negligence.” Such an one should never ascend to the presidency, or any elected office! If Clinton were accountable under the law like the rest of us are, the bumper sticker “Clinton for Prison, 2016,” would be a reality!