Over the past few days we have watched protest after protest in the streets all over our nation, but sometimes you read a story that warms your heart. It seems that in Brooklyn New York some Commie, Pinko, Liberals decided they were going to burn our nations flag, well what happen next made my day. Here is the story taken from the New York Post.

A group of flag-burning anti-NYPD protesters needed New York’s Finest to save their skin from a gang of angry bikers who tried to pummel them in a Brooklyn park for setting Old Glory ablaze Wednesday.

The fiery stunt by a few dozen members of the group Disarm the Police led to a chaotic scene at about 8 p.m. in Fort Greene Park, when the activists enraged 40 members of the Hallowed Sons Motorcycle Club by roasting the flag on a tiny barbecue grill.

“They took off like little b—hes,” said one biker. “They lit the f–king flag and took off running once they got slapped once or twice.”

The anarchists had announced on social media that they had planned to burn the flag in protest of NYPD policies, drawing a large group of flag-waving counterprotesters, including the bikers.

While it’s illegal to openly burn anything in Fort Greene Park, the self-styled anarchists managed to find a loophole in the law that allows cooking in closed barbecue grills.

Thus, they started to roast the flag, but they didn’t burn it for long. One of the bikers rushed forward in a fit of rage and kicked over the grill, sending embers flying. He then doused it as members of the pro-flag crowd chanted “USA! USA!”

The bikers then started trying to rough up the protesters — who were quickly saved by members of the same police force that they criticize.

The protesters were shielded by the cops and escorted out of the park.

“I served in the Marines,” said counterprotester Brian Christopher, 23. “We defend this flag. We are ready to die for it. When I see people burning it and showing complete ignorance, it’s very offensive.”

No arrests were made in the scuffle, and the group’s flag-burning stunt went up in smoke.

They took off like little bitches is my favorite part. 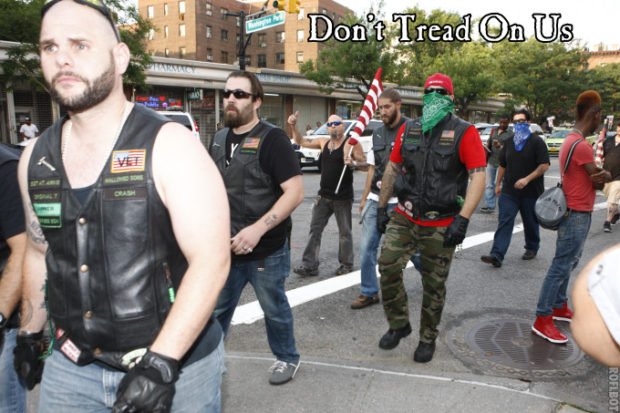