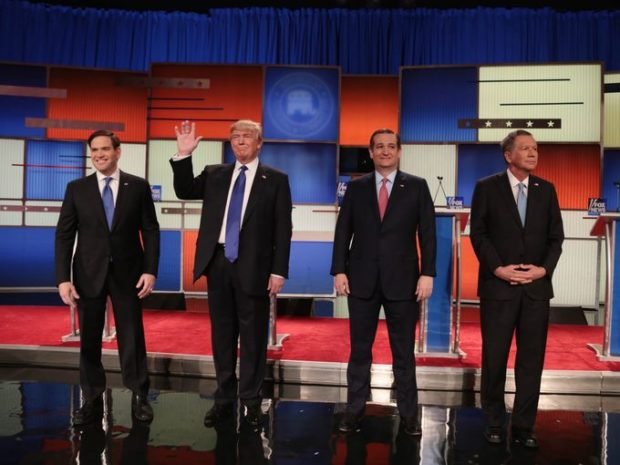 The latest GOP debate was held in the University of Miami in Miami Fla. and in spite of what the pendants said about it being so great I thought it was the most civil of the debates with no mudslinging but underwhelming. Even Donald Trump remarked at one point that he couldn’t believe how civil it was this time. I thought it was underwhelming because I didn’t learn anything new and it was the same old same old. John Kasisch stated all the great things he did for his state and his history of being on the armed services committee and other committees in the Senate.  Marco Rubio talked about his upbringing from a poor Cuban family that came over here and how we all have to come together to make our country great again. Donald Trump talked about how we lose all the time because of bad deals and we have to make great deals which he would do and Ted Cruz talked about the importance of all the parties coming together or we lose to Hillary and the dems.(YAWN).I’ve seen this movie before ,but after twelve debates what can you expect and there are two mores scheduled. Maybe when it‘s just the two of them it will be more exciting.

I thought Jake Tapper’s questions were aimed at bringing down Donald with his questioning Donald’s’ comment about Islam hating us which I agree with Donald on. Donald clarified his remarks by stating there is an awful lot of hate aimed at us out there from a lot of Muslims, not all, but a lot which is true and we have to find out what is going on. The media seems so oblivious and naive to this fact and when they wake up it will be too late. Maybe another 9/11 aimed at CNN or similar media establishments will change their minds. The Koran says to become friends with the non believers until you are strong enough to crush them and to oppose the non believers until there are no more non believers left.

They criticized Trump’s statements about Putin bei
ng a great leader which he is and I agree with Donald that just because he was saying he was a great leader doesn’t mean he was siding with him, he was just stating  a fact. Putin is a great leader with a firm control of his country and people unlike the weakling we have in there now.

They brought up what I thought was an unfair question about violence at his rallies. I’ve seen his rallies and it is the worst kind of trouble makers that instigate this violence and come there with the intention of doing so. So It’s not Trump’s fault. During that segment Hillary tweeted that Trump’s rallies cause violence. Again the media via CNN and Jake Tapper were instigating the left and Hillary against Trump.

Tapper then asked that if no candidate gets enough delegates will they have a brokered convention?

Ted Cruz responded that if Trump gets the nomination he will lose to Hillary which is why the media endorses him.

Trump responded that he beats Hillary in most polls and he hasn’t even started on her yet.

Overall it was a very civil and substantive debate with no harsh language or insults. As the debate ended you could hear cries of “Trump, Trump, Trump” by many of the male students in the audience. :D