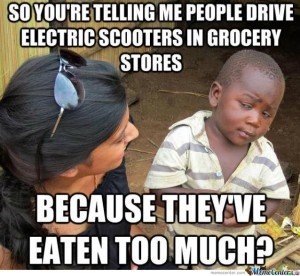 For decades Americans have been laboring under a misconception that has fueled the growth of Jenny Craig, stretched spandex to the limit and turned people–watching at the mall into a vaguely unsettling experience.

Mothers, teachers and motorcycle cops have been lecturing us for years that “haste makes waste.” Meaning rushing through a project, test or municipal speed trap can result in sloppy work, wrong answers or hefty fines.

Yet the advice is completely wrong. Haste has almost no correlation to waste. A slap–dash effort directed toward your chores or homework enables you get back to updating your Facebook page that much sooner. And speeding tickets are just a tax on velocity and no indication of a lack of attention to detail.

What these authority figures should have been telling us was “haste makes WAIST.”

Japanese researchers with a strange mastication fetish have been studying how people eat. They’ve discovered a direct relationship between how fast you consume and your time in the 40–yard dash. Wait, that can’t be correct. Foot speed is an indirect result. After analyzing 23 other studies, the New York Post tells us, researchers determined diners that wolfed down their food “were more than twice as likely to be obese than those who said they ate more slowly.”

The weight disparity could have been because the fast eaters asked, “are you going to finish that?” and cleaned the slow eater’s plates before they had a chance to respond.

Since a significant portion of the social science community makes a living performing tests that merely serve to confirm conventional wisdom and/or common sense, none of the researchers admitted mom was right when she told you to “chew each bite 40 times.”

It’s possible this judgment is a bit harsh. Maybe the scientists are unfamiliar with the digestive dictum. Judging by the number of people I see in restaurants chewing with their mouths open or talking with their mouths full it could be that mom has completely given up on chewing frequency and is content if the kids avoid becoming cannibals.

Evidently a satiation race begins each time we sit down in front a full plate and begin to eat. According to the science, which I have questions regarding, the longer food stays in your mouth “the more it triggers sensors in your tongue and oral cavity to send satiety signals to your brain.”

This clears up one question I’ve had. In the past I merely assumed it was the cancer keeping tobacco chewers so slim and trim, but evidently it was because their tongue was confused and told the brain they weren’t hungry. Or they were simply nauseous from swallowing the juice.

One would think with the head start an impulse from the tongue has over one from the stomach, keeping the brain up–to–date on digestive progress wouldn’t be hard, but that’s not the case. Like Ben Carson answering a foreign policy question, the full impulses are always a bit behind the curve. Gravity and peristalsis — combined with a Henry Ford, assembly–line style of eating that always has another bite ready as soon the previous morsel disappears down the hatch — appear to give incoming demands the advantage. Before you know it, it’s standing room only in the stomach.

Had America taken mom’s 40–chews–per–bite advice and ruminated more over dinner the nation might be less bovine in appearance now.

If you’re going to haste regardless of your waist, another nutritionist has a suggestion. This time drink 16 ounces of water at whatever breakneck pace you choose, only do it just before you eat. The water will take up space and reduce the size of your meal regardless of how lethargic your tongue receptors are.

I’ve tried this technique in restaurants and it works like a charm. Midway through the meal I have to excuse myself and use the bathroom. At my age by the time I return the waiter has frequently cleared the table, eliminating any temptation for additional eating.

Whether or not you decide to pre–soak your stomach before dinner, please keep in mind “haste makes waste” eating doesn’t mean you get another stain on your pants. It means you get another pound on your hips.

Support Conservative Daily News with a small donation via Paypal or credit card that will go towards supporting the news and commentary you've come to appreciate.
Tags
Health and Fitness obesity