Who would have believed that Donald Trump would have made it this far. I myself wrote an article a few months back stating that Mr. Trump would eventually fall by the way side. As Mr. Trump rolls on, he just keeps picking up more steam and more votes along with it.

There is one thing he did that I will be forever grateful for, because of all the excitement that Mr. Trump creates, my 3 kids are actually starting to get involved in our political system. For years I have tried to get them to take an interest in what goes on in our country, but it always fell on deaf ears. To think I actually have conversations about politics with the 3 of them truly boggles my mind, sometimes I stare at them with disbelief.

It’s not only my kids, everywhere I go I hear people talking about Donald Trump, and it’s 90% positive too. I went to the supermarket the other day and as I was standing in front of the meat case two women were discussing how Mr. Trump was the only politician they have trusted in many years, how he is saying what most Americans are feeling but never spoke up.

Say what you want about the Donald, but he is getting people involved that never were involved before, and that’s a good thing. I remember when I first started to wake up to the things around me, it was when Jimmy Carter was president. Things were so bad in this country that even I noticed it, that’s when I first started paying attention to one Ronald Reagan, and was the first time I voted.

It appears right now that Mr. Trump will make a clean sweep and become the nominee, but you never know what might happen. All I can say is, I will be forever grateful to Mr. Trump for waking up my kids to the problems this country faces, and hope they will forever be involved. For that I give Mr. Trump a thumbs up and a hearty THANK YOU. 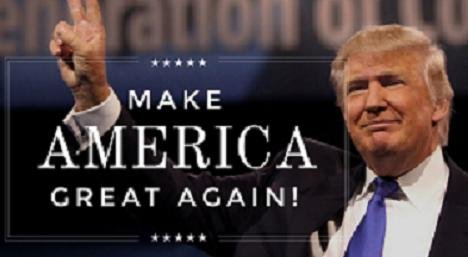