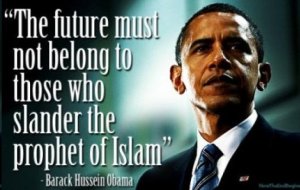 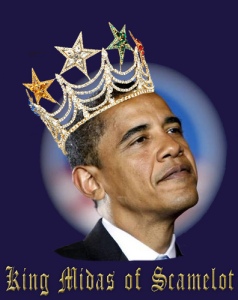 It should be plainly obvious to everyone now that Obama doesn’t care about them or the country anymore. I never for once thought he did from the first day he arrived. One of our young aid workers is beheaded over there in Syria and he gives a three minute speech and heads out to the golf course. A sweet young female aid worker is killed by ISIS (or the JV team as he calls it) and he takes selfies. Now 21 coptic Christians in Libya from Egypt are brutally beheaded and put on video for the world to see and he heads out on another vacation paid for by our tax payer money  in Rancho Mirage, Calif. for a golf outing on a course owned by a billionaire with his buddies from Hawaii.

Jordan’s King reacted swiftly and immediately when their pilot was burned alive by killing his prisoners and bombing ISIS. Egypt’s king bombs them after his people were beheaded. Obama heads to the golf course.

As one commenter so aptly put it:

How tone deaf can he be? Twenty-one Egyptian Coptic Christians were beheaded for all the world to see; Copenhagen suffers a terrorist attack, the East Coast of the US continues to suffer from brutal weather, and the president of the US is rubbing elbows with billionaires and golfing in California without a worry in the world. He isn’t even trying to act likes he cares anymore, is he? I suspect the goal now is just to burn through as many tax payer dollars as he and his family can before they ride off into their very profitable post-presidential sunset.

I never thought I’d say this, but everyone who voted twice for this fraud now has blood on their hands. He has put Muslim Brotherhood people in every facet of government, opened our borders and is letting many Syrians in now and it is impossible to tell who is a jihadist and who isn’t and he enables terrorists. Our brave men and women fought and died to make this country safe from terrorists and he is letting them out of GITMO to return to the battlefield to wage war against us again.

Meanwhile Michelle and her entourage are skiing at Snowmass at Aspen this weekend. Michelle’s trip doesn’t seem to have made national news and might have escaped notice altogether had it not been for a traffic accident that slowed their motorcade.

Great LITTLE Vacation? When it comes to vacations, outings, and private parties, there is nothing little about any of it. They spend more on a single vacation, than 5 or more middle class families make in a year.
Their vacations, food tastes, thrill for fun and play, gives them a feeling of entitlement off the American tax payers dime.
They are, however, thanks to his position, raking in Billions of dollars for their retirement, also from the tax payers dime, in a manner of speaking. He went into the Whitehouse on a shoestring budget, and will exit it, in the Billionaire status.
I do not despise the man, or his family, but I do despise all that he stands, and does not stand, for.
If and when he does leave the Whitehouse, he will have done so as the biggest hoax, ever perpetrated upon America and it’s People. He will laugh all the way to the banks, and up his cuffs, that Americans were stupid enough to put a unknown, with no credentials, who had every pre election record of his sealed from our view, a Muslim, and Socialist, into the greatest seat our Country has. The joke is on us, and we will likely suffer the consequences for many years to come, as we attempt, likely unsuccessfully, to gain back our once Great standing in the World. He is the wrecking ball, which will leave us, completely beat down.

No, Obama just doesn’t care about us or the country. He never did in the first place. It’s all about him, power and furthering Islam as he hates Christianity. He only posed at being a Christian to  get elected.. Even his top advisor Valerie Jarrett recently said her job is to make this country more Islamic. Impeach him now. I don’t care if Biden takes over. It will only be for a short while anyway.