One of the predictable effects of the secularization of our culture and our society is the debasement of our collective moral fabric, our social mores. The absolute and fundamental matrix of values that form the basis of our Judeo-Christian society have steadily eroded, and at an accelerated rate over the past few decades. This erosion of traditional values has contributed to proliferation of a moral relativism that is profoundly evidenced by displacement of social standards and individual religious belief systems.

The late Alan Bloom, professor of philosophy at Cornell, Yale, and the University of Chicago, wrote, “There is one thing a professor can be absolutely certain of: almost every student entering the university believes, or says he believes, that truth is relative.” If all truth is relative, all morality becomes relative as well, for the elimination of absolute truth claims absolute morality as its first casualty.

This moral relativism has coincided predictably with the secularization of our culture. Supplanting our Judeo-Christian value system, by effectively removing it from the public realm, has effectively left our society as a ship without a moral rudder.

Moral relativism ensues when ethical standards, morality, and positions of right or wrong are culturally based and therefore subject to a person’s individual choice. There are no absolutes. All morality is relative and up for individual interpretation. Fixed standards of value don’t exist aside from the changing whims of society, social trends, and sometimes even government regulation.

William McGuffey, who authored the McGuffey’s Readers, which were the mainstay of America’s public school system for nearly a century, wrote: “Erase all thought and fear of God from a community, and selfishness and sensuality would absorb the whole man.” Today we witness the veracity of his statement with certitude.

Moral relativism weakens our collective cultural conscience. It weakens our ability to identify evil and our resolve to confront it as such. It leads to the perfidious exoneration of individual responsibility and culpability for perpetrators of evil, and seeks blame for such actions in social, parental, and educational failures. It prevents us from recognizing the evil in our midst that threatens our families, our neighborhoods, our culture, and our nation. And if allowed to continue unabated, it perpetuates the continued erosion of our entire civilization.

John Adams said, “We have no government armed with power capable of contending with human passions unbridled by morality and religion . . . Our Constitution was made only for a moral and religious people. It is wholly inadequate to the government of any other.”

Benjamin Rush, Signer of the Declaration of Independence said. “The only foundation for a useful education in a republic is to be [based] in religion. Without this there can be no virtue, and without virtue there can be no liberty, and liberty is the object and life of all republican governments.  Without religion, I believe that learning does real mischief to the morals and principles of mankind.”

Noah Webster, for whom the Webster Dictionary is named, and often regarded as the father of American scholarship and education, echoed those sentiments. “The Christian religion, in its purity, is the basis, or rather the source of all genuine freedom in government. . . . and I am persuaded that no civil government of a republican form can exist and be durable in which the principles of that religion have not a controlling influence.”

The First Amendment to the Constitution assures the free exercise of religion, yet due to fear of lawsuits from the ACLU and other malcontents, religion has been nearly expunged from the public square. The freedom of exercise clause has been consequently whittled to a sliver, as religious expression and any semblance of religious morality has been systematically extirpated from society in general.

We have become such a paranoid secular society due to political correctness that even the establishment clause of the First Amendment is incessantly challenged. And when you think about it, by far the most coercive element challenging the establishment clause is secularism itself, which is little more than a godless belief system that substitutes God with human intellect. A student uttering a Christian prayer at commencement no more violates separation of church and state (which isn’t even in the Constitution) than a secular commencement address. Neither violates the compulsory prohibition as expressed in the establishment clause, which disallows a state-sponsored religion.

Last November Rev. Billy Graham presented his final broadcast to the American people. In it he declared, “Our country’s in great need of a spiritual awakening. If ever there was a time this country needed the intervention of God, it is now. We can and should pray for America as a whole, but remember that when God sets out to change a nation, He begins by changing people. It starts with individuals.”

America was not founded as, nor was it ever intended to be, a godless country. Secularism is euthanizing the soul of the nation, challenging even the bedrock institutions of civilization. If we are to survive, it will be by turning to God and reaffirming the natural rights acknowledged and ostensibly assured by our classical-liberal founders, and by those of moral clarity and conviction being involved in the political process.

Democrats use fear-mongering in last ditch effort to hold majority 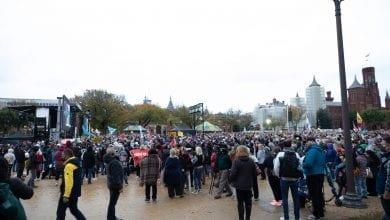