The Muslim world has been without a Caliph and Commander of the Faithful for ninety years, and now the new fundamentalist Islamic entity in Iraq and Syria known as the Islamic State has put forth a pretender to claim the title. At the age of 43, Abu Bakr al-Baghdadi burst upon the national scene as the operational and political leader of ISIS (Islamic State in Iraq and Syria ), and now is the new spiritual leader of the newly proclaimed Islamic State.

Armed with a Ph.D. in Islamic studies, Abu Bakr was a cleric at the Imam Ahmad ibn Hanbal Mosque in Samarra at the time of the US invasion of Iraq, He joined the Mujahideen Shura Council  (associated with Al Qaeda in Iraq and later to morph into ISIS) and battled US forces. As the Iraqi war continued, he rose through the ranks of Islamic militants and became the leader of ISIS in May of 2010. ISIS is considered an al Qaeda offshoot and a spawn of Abu Musab al-Zarqawi’s Islamic State of Iraq (ISI). It even runs a “Zarqawi Camp” training center on the outskirts of the Syrian capital of Damascus named in his honor.

A caliphate was proclaimed on June 29, 2014 and Abu Bakr al-Baghdadi—now known as Amir al-Mu’minin Caliph Ibrahim—was named as its caliph. At the same time ISIS was renamed the Islamic State.

In a remarkable fashion, Abu Bakr has transformed a few shattered Al-Qaeda-in-Iraq terror cells who were on the verge of extinction into the fastest growing, wildly successful, and most dangerous militant group in the world. ISIS mutated and grew exponentially during the ongoing civil war in Syria as well as in the security vacuum that followed the departure of American forces from Iraq. In 2013 it absorbed  the Syrian opposition group Jabhat al-Nusra and added thousands of battle hardened fighters to its ranks. In 2014 Abu Bakr formerly broke ISIS away from Al-Qaeda to follow his own path and seek his own destiny on the world stage.

Now Abu Bakr has hundreds of millions of dollars in his war chest, captured a vast horde of modern arms and ammunition of American origin from the collapsing Iraqi army, and has been reinforced by thousands of Jihadists from around the world eagerly traveling to join his Islamic State caliphate and fight a holy war. The newly self-anointed caliph seeks to follow in the footsteps of Muhammad himself and convert and conquer the world for Islam by the edge of the sword.

The eery truth, which few acknowledge and understand, is that Al-Qaeda, ISIS, and similar groups are following a purer form of Islam than many other Muslims. What Abu Bakr teaches, the tactics his army practices, and the reasons for the wars he now wages is far closer to the true teachings and actions of Muhammad and original Islam than most are ready to admit. Yet, such a statement is historically accurate.

ISIS has had tremendous success in attracting foreigners to its ranks with thousands flowing in from all over the world to join the fight.  Its membership requirements are minimal and most foreign recruits are even allowed to fight in single nation battalions. It has become a recipe for success. This new conflict is just getting started and I suggest that you educate yourself on the new face of the old enemy the West and all civilized peoples are facing.

Currently, ISIS fields the most impressive and fanatical army in the Middle East and Abu Bakr has wielded it with great success. In just a few months of offensive operations it routed the Iraqi army, killed tens of thousands of its enemies, forced hundreds of thousands to flee before them, conquered vast swaths of territory, embarrassed the famed Kurdish Peshmerga, attracted tens of thousands of new recruits, and captured the attention of the world. Sheer will and ferociousness, a much deserved reputation for brutality, strategic alliances, and shrewd battlefield tactics have been a winning combination for Abu Bakr and his men. Creative tactics, recent atrocities, and battlefield successes have allowed him to redraw the map of the Middle East and probably drag the United States and its allies into a new war (or a new chapter of the old one if you prefer).

Osama bin Laden is dead and gone and Al-Qaeda is just a pale shadow of its former self. But a new bin Laden and a new terrorist army has arisen from chaos and conflict to take its place, carry on the vision of ruthless Jihad against the infidel, and proclaim the re-establishment of the caliphate. 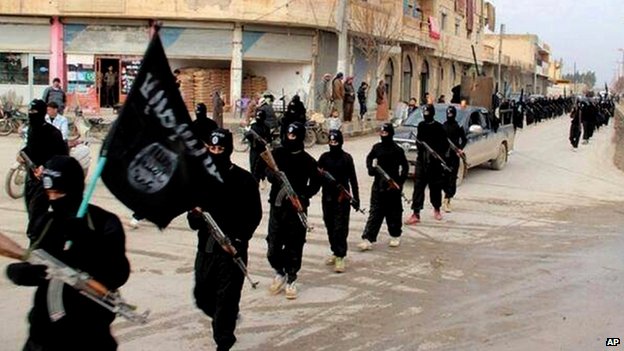 ISIS is on the march