Fox News is reporting that Libya’s ousted leader,  Muammar Qaddafi has been captured. He was reportedly wounded in both legs and found in a hole similar to when Iraq’s oppressive leader, Saddam Hussein was captured. UPDATE: AFP confirms Qaddafi dead. i (Pic: AFP /Philippe Desmazes) It is reported that Qaddafi was shot in both legs and shot in the head. He was reportedly found hiding in a bunker.  The conflict remains about how Qaddafi was originally captured and then whether he was executed by an order to avoid his trial. Information Minister Mahmoud Shammam said he has confirmed that Qaddafi was dead from fighters who said they saw the body. He said he expects the prime minister to confirm the death soon, noting that past reports emerged “before making 100 percent confirmation.” Huge concerns about the huge stockpiles of rocket-fired missiles are being reported, as there are no NATO/US boots on the ground to keep those weapons from being sold on the black market.

In an earlier report from Foxnews.com we had seen it reported that Libyan Rebels had captured Qaddafi’s home town of Sirte, which apparently led to his capture. We will update this story as more information becomes available. 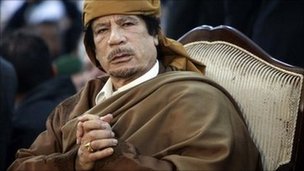 Qaddafi took power in 1969 in a bloodless coup at the young age of 27. A ruthless dictator for 42 years, he ruled Libya with an iron fist which included reinstating the punishment of cutting off the hands of thieves. U.S. President Reagan gave Qaddafi the moniker of “Mad Dog of the Middle East. According to the latest reports. NATO jets attacked a convoy trying to escape the town of Sirte,  in which Qaddafi was riding in. The Libyan Rebels then captured Qaddafi alive when they found him hiding in a drainage ditch, and attempted to transport him to their Headquarters in Misrata. Qaddafi had wounds from gunshots to his legs and eventually was shot in the head, but whether it was the Rebels or the NATO strike that resulted in Qaddafi’s death is still in dispute.

Libya is now free from the notorious Dictator and there is dancing and celebratory gunshots in the streets across Libya today. France and the UK are to be commended for their role in the initial demands to intervene in Libya and to oust Qaddafi. President Obama eventually bent to the demands of French President Sarkozy to intervene in Libya, and the U.S. was very heavily involved in the initial air strikes and supplied the majority of the cruise missiles that started to turn the tide against Qaddafi. Many people have criticized President Obama for not taking action sooner and possibility avoiding some of the atrocious murders of the Libyan citizens in late 2010, and in the beginning of 2011.

The world, and especially the Libyan people are better off today with the death of the ruthless Libyan Dictator who was also responsible for numerous bombings in other countries, including the deaths of 270 people in the Lockerbe bombing over Scotland. Just what the Libyan people do with their new-found freedom remains to be seen. Qaddafi was supposedly the last obstacle preventing them from installing a Democracy and creating a new constitution. Just how they handle their new-found freedom and liberty could set them up for a true Democracy and a bright future for all Libyans if done properly without overt influence from radical fundamentalists in the area.

UPDATE: While Fox News reports Qaddafi is now dead, the BBC still reports that  he was captured here.