Barack Hussein Obama’s place of birth has been embroiled in controversy. His official date of birth is August 4, 1961 in Honolulu, HI., and some have questioned whether he is legally qualified to serve as President of The United States of America.

He is married to Michelle (Robinson) Obama, and they have two daughters.

This is yet another topic that is somewhat of a controversy for Obama. All of his records have been sealed which serves only to stir the pot of controversy even further.

He taught Constitutional Law at The University of Chicago Law School, but there is little information available on his time with the school.

Religious Affiliation
Officially, says he is a member of the United Church of Christ religious denomination.
He attended Trinity Church, which is based on black liberation theology, sitting under Rev. Jeremiah Wright for 20 years. Obama says
Rev. Wright helped “bring me to Christianity.”
He was brought up in the Muslim faith, but was “never religious”.  His school listed him as Muslim.
He is the first President of The United States not raised in a Christian home.

Once again, there is much controversy surrounding President Obama’s religious beliefs and affiliations.

Political Campaigns
1996- He was handpicked as successor by retiring State Senator. Obama was the only name on the ballot.
1999- Ran for Congress, but lost
2002- Ran for re-election in the Illinois State Senate, unopposed

Special Interests
** For a full list of all Special Interest ratings, grades and comments, visit the links at the bottom of the page for On The Issues and Project Vote Smart **

NOW– National Organization for Women
Though he supports this initiative, he DOES NOT support the initiatives of Concerned Women For America

On The Issues
Believes The Constitution of The United States of America is a living document and has no strict constructionism
2010-  Said, “Constitution is stained by nation’s original sin of slavery”

Is somewhat wishy-washy on American Exceptionalism

Campaigned that he would close Gitmo within a year of being sworn in- Gitmo is currently still in operation
Promised to repeal Patriot Act, then voted for it

A Czar is an appointee of the President that has no Congressional oversight nor is the role provided for in our three branch system.

With the appointment of so many “czars”  (the total number of czars in 2011 is 39) into powerful positions, our government has taken on an entirely new look. We are seeing the consequences of what happens when the executive branch has too much power and it goes unchecked.

Perceptions of his Presidency
He is said to be in the running to hold the title as “worst president in U.S. history“, with only two other contenders: Jimmy Carter and James Buchanan.

Publications
1995- “Dreams From My Father: A Story of Race and Inheritance”
2006- “The Audacity of Hope: Thoughts on Reclaiming the American Dream”
2006- “It Takes a Nation: How Strangers Became Family in the Wake of Hurricane Katrina”

In previous articles, I have stated that President Barack Obama could have been the best president this country has ever seen! Though I personally disagree with him on almost every political issue, he is in a very unique position in many ways. Yes, he is the first black president of The United States. Barack Obama could have been the greatest unifier this nation has ever seen! However, he has gone the opposite direction. Sadly, he play the race card as often as possible, pitting the black communities against the white communities at every opportunity he can find. It is truly sad to see a man who’s own mother had “milky white skin”  cling to racism as he does. I am not so naiive as to think that there were not race related issues going on before President Obama stepped into office, however, had he worked in a positive way, rather than the negative, this country could have truly begun to heal from centuries of true racism. Instead, he is the greatest divider this country has ever known.

In The News
Black Caucus: Tired of Making Excuses for Obama
Bus Tour Criticized By Fellow Democrat
New Low of 26% Approval Rate for Obama
AP: On The Road With Obama- A Hunt For Photo Ops
Trump on Obama: Takes More Vacations Than Any Human Being I’ve Ever Seen
Plan B For Obama Family Vacation
Obama: Another Year or More for Housing Turn Around
Obama “Volunteer” Praised For Saying Wealthy Need To Pay Fair Share
Obama Dismisses Farmer’s Concerns About Regulations- “Don’t Always Believe What You Hear”
Inflation Up Most in 6 Months
Food Prices Rise
Unemployment Continues To Rise 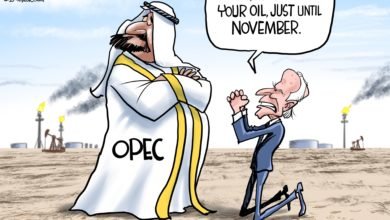