Health care reform is badly-needed, but I am certain that what is being proposed won’t create a higher-quality system, just a higher-cost one.  The current administration is using poorly-vetted statistics to convince the American population that the only way we can have health care is if the government gives it to us.  So some things you may have heard: 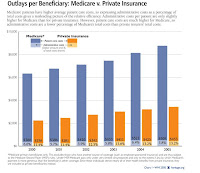 Administration Statement: “If you like your health plan, you can keep it!”
Plain, Hard Truth: Due to the “grandfather clause” in H.R.3200 (full text), an insurance company can NOT enroll new members into any plan that is not government approved.  If “government approved” didn’t scare you enough, here’s how insurance works.  Over time, people leave certain plans/products.  If there are no new members coming into that plan/product to keep the risk pool viable, the product/plan is no longer supportable and will be discontinued.  If you like your PPO, HSA, or other “not government-approved” plan… it will be discontinued once the new health plan makes it economically infeasible.

Excerpt from H.R. 3200 Section 102(a)
“(1) LIMITATION ON NEW ENROLLMENT
(A) IN GENERAL
Except as provided in this paragraph, the individual health insurance
issuer offering such coverage does not enroll any individual in such coverage if the first effective date of coverage is on or after the first day of Y1″

Administration Statement: “You will not be denied coverage due to pre-existing conditions”
Plain, Hard Truth: You won’t be denied coverage, but many will face denied reimbursement.  Since the the current public option is based on the Medicare fee schedule, if it’s not in there, you won’t get reimbursed for it.

Administration Statement: “The government will not come between you and your doctor”
Plain, Hard Truth: The government said that in 1965 with the first public option (medicare): Original Medicare Promises – Now Broken 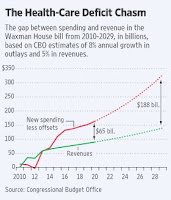 Administration Statement: “The plan must be budget-nuetral”

Plain, Hard Truth: It already isn’t and it hasn’t even started: Rising cost of entitlements.  We simply can no-longer afford a free-spending Congress.

Administration Statement: The only way to fix health care is a government-run option
Plain, Hard Truth: There are many alternative ideas in Congress that will improve our health care situation.  Some of these ideas have already been implemented at the state level and are showing promise.

Texas has implemented tort reform and seen an increase in available providers (over 57% increase) and provider competition. With that change alone, hospitals are saving millions of dollars on legal proceedings and using that money for increased services (better access) and charitable services (free access to the under-insured). Results from Texas Tort Reform (many will argue – “But where are the savings?”.  Controlling costs are but one facet of true health care reform.  We must increase access to good health care as well as making it less expensive.

We are hearing that a shortage of doctors is affecting accessibility.  Texas has an increase of almost 15,000 physicians since the 2003 Tort Reform (Proposition 12).  Governor Rick Perry has indicated that tort reform has made previously-unavailable services such as Obstetrics and Gynecology accessible to critically underserved communities in lower-income and rural communities.
One could add in portability by removing the federally-mandated state borders for insurers and doctors as well as making it just as lucrative for people to get health insurance directly instead of through their employers (individual plans exist today, but tax-incentives are only if the health plan is acquired through an employer), and finally… there must be a co-pay… free gets too expensive too quickly (economics 101).

Summary:
We can and should enact health care reform.  It should be done incrementally so we can learn what works and modify what does not.  Doing everything all at once will irreversibly destroy the health care system we have and put a far more dangerous one in its place.